American Legion members will vote on the city’s offer of space in the V.O. Dobbins Center on May 6.

KINGSPORT — After months of uncertainty and behind-the-scenes discussions, the American Legion may have found a new home. 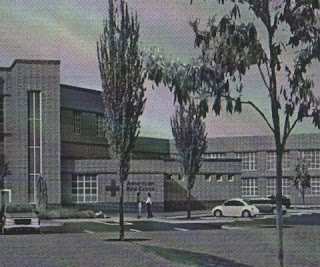 The city of Kingsport last month offered the American Legion of Kingsport space in the V.O. Dobbins Center. Kingsport is planning an $8 million renovation and expansion project for the center, adding just over 50,000 square feet of new space to the building. Over half of the new space is designated as a nonprofit center, and a portion of this space has now been offered to the American Legion.
Gerald Cardwell, commander of the American Legion in Kingsport, said the organization’s executive committee met on April 22 and unanimously voted to accept the city’s offer. Since the city needs a letter of intent from the American Legion before the Board of Mayor and Aldermen’s May 19 meeting, Cardwell has called a special meeting for May 6, where members will vote on the offer.
Cardwell said the V.O. Dobbins Center would be an ideal long-term solution for the American Legion.
“I feel great about it,” Cardwell said. “Long term it’s going to work out for us better I think.”
Under the terms of the lease, Cardwell said the rent is going to be in the neighborhood of $5 to $5.25 a square foot per year. With the American Legion needing around 1,000 square feet, the yearly rent would come to roughly $5,000 a year or $416 a month — nearly the same as what Cardwell was willing to pay to rent the old Highway Patrol building on Fort Henry Drive.
In addition, Cardwell said the city would furnish everything in the office, including utilities, janitorial services and common areas for restrooms, kitchen space and meeting rooms.
The BMA has yet to approve the bonds for the renovation work at the V.O. Dobbins Center, and the work is not expected to begin until September and take 11 to 13 months to complete. Which means the American Legion would either have to stay in its current site for another year and a half, or find another temporary home.
The American Legion sold its old facility — located behind Legion Pool — to Kingsport City Schools last fall for $327,000. In return, KCS allowed the veterans organization to keep its office in the building for six months until a new home was found. Recently, KCS gave the American Legion a three-month extension, and Cardwell said the city is working with them on some space in the Civic Auditorium until V.O. Dobbins becomes available.
“Our number one option is to keep the office there now. If (KCS) wants us to move, we’re OK with moving to the Civic Auditorium in the interim,” Cardwell said.
Mayor Dennis Phillips worked to broker the deal with the city and the American Legion, meeting with Cardwell last month and proposing the V.O. Dobbins Center as a possible home for the veterans organization.
“I think it’s a very good home for the American Legion at a very affordable price,” Phillips said. “It’s a good working situation that may be better for everyone. It gives us a good tenant at V.O. Dobbins, and it gives them a good permanent location that’s very affordable.
“It’s a very reasonable compromise.”
If the American Legion votes to accept the city’s offer, then it would take the issue of the old Highway Patrol building off the table.
After the American Legion sold its old facility to KCS, City Manager John Campbell approached the organization about the old Highway Patrol building at the corner of Eastman Road and Fort Henry Drive. The building now houses the city’s engineering department, and Campbell would like to see the department relocated back downtown.
The American Legion became excited with the prospect of getting that building, especially since Kingsport Tomorrow was working to build a new veterans memorial adjacent to the building.
However, the proposal hit several bumps in the road, with both sides not being able to reach an agreement over the sale or lease of the building — the American Legion either wanted to buy the building or lease it for around $400 a month, which didn’t sit well with some on the BMA.
In addition, other BMA members did not want to move engineering out, especially since the cost of doing so is estimated to be about $300,000.
Cardwell said he believes his members will approve the city’s offer next week and that there would not be a fight over the organization going into the old Highway Patrol building.
“It’s still an ideal spot for us, it would be,” he said. “But if we lease it, then we’d end up paying the utilities, so I still think we’re getting the best deal at the nonprofit center.”
Posted by douglassriverview at 11:11 AM