City Manager John Campbell said the city could take the foundry property by imminent domain but would have to prove it had a viable public use for the property.

THE OLD KINGSPORT FOUNDRY.. IN ITS HEYDAY AT FULL MANUFACTURING STRENGTH, THE FOUNDRY LENT AN INDUSTRIAL PALOR OVER RIVERVIEW AND SOUTH CENTRAL KINGSPORT. 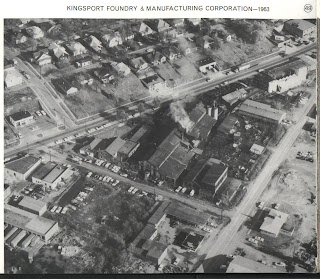 SONS AND DAUGHTERS OF DOUGLASS EDITOR'S NOTE: WITH THE CITY PLANNING TO BEAUTIFY RIVERVIEW.. JUST ACROSS THE RAILROAD TRACKS, HEAVY INDUSTRY MAY COME BACK. TRY AS IT MAY.. RIVERVIEW-SOUTH CENTRAL CANNOT SHAKE ITS INDUSTRIAL PAST.

KINGSPORT — Talk of a new metal reclamation business on the old Kingsport Foundry site has prompted a proposal to rezone the property and surrounding areas.
The rezonings — from M-2, general industrial district, to B-2, central business district — would include the old Jack’s Restaurant property the city’s industrial development board plans to buy. Officials also discussed Tuesday buying the foundry or acquiring it by imminent domain.
The foundry, restaurant and other downtown properties bounded by Main, Sullivan, Market and Unicoi streets soon will be rezoned from manufacturing to business if the Kingsport Economic Development Board and Mayor Dennis Phillips have their way.
Affected property would include the area around the already rezoned Kingsport Grocery Co. building and the old Slip-Not Belting building.
New Shenandoah Co. LLC owns the property, and company owner John Marotta of Erwin said Tuesday he would be against the rezoning because it would take away flexibility in utilizing the site.
“I do not have immediate plans. I have other bigger, projects that are keeping me working,” Marotta said by phone, although he said a metal reclamation business was a possibility for the site.
The KEDB voted Tuesday to ask the city to rezone the properties from M-2 to B-2. City Manager John Campbell said the city could take the foundry property by imminent domain but would have to prove it had a viable public use for the property.
The KEDB also voted to buy the old restaurant property, 808 E. Center St., for up to an appraisal of $140,000.
“If I was not mayor, I would buy that property for $140,000,” Phillips said.
KEDB unsuccessfully tried last year to buy the old Kingsport Foundry. The property is about 5.2 acres that is in disarray.
A representative of Shenandoah called Assistant City Manager for Development Jeff Fleming last week, saying the owner was considering placement of a metal reclamation business on the property and asked if the city still had interest in purchasing it.
“It is zoned appropriately and could be used for that,” Fleming said, adding that the rezoning could go before the Board of Mayor and Aldermen next month but it likely would be in July unless the Planning Commission agreed to hear it on an expedited basis later this month.
A property that is rezoned can continue with activities allowed under the old zoning, with a lapse of up to a year. However, board attorney Gorman Waddell said that operations had ceased at the site more than a year ago.
Fleming said no other property in that area has manufacturing, but Marotta said he could put some industrial activity there in short order to keep the grandfather clause alive. Phillips, in contrast, said the foundry site should be a gateway to downtown.
“We are going to do something to get that eyesore out of Kingsport,” Phillips said. 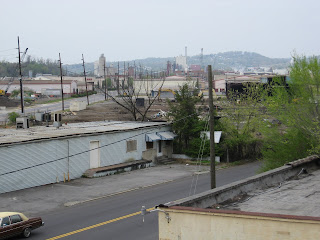 KEDB officials also discussed the possibility of buying and combining the foundry property, the adjoining Mullins and Quillen property and the restaurant property. Marotta said he once had options to by the Mullins and Quillen and restaurant sties.
“The discussion centers mainly about it (that area) being an entrance to the city,” said board member Lynn Johnson, who made the motion asking for the rezoning, seconded by Julie Bennett..
Fleming said the foundry and other two properties could be used as a green space park, a light industrial park or resold in smaller tracts for redevelopment.
KEDB officials Tuesday said they are still interested in the property, although they did not vote to make another offer. KEDB offered $660,000 last year and did not receive a counter offer or response, Estepp said. Marotta said the asking price was $1.2 million.
“That’s a negotiable number, but it’s not negotiable enough I’m going to cut (the price) in half,” Marotta said.
However, he said he would be more flexible if the KEDB would take the 5.2-acre foundry site and the .6-acre site of the old E.J. Smith Oil Co., which had contamination problems he said were deemed clean by the Environmental Protection Agency in December 2007 — with some maintenance required.
“I look forward to talking with them,” Marotta said.
KEDB Chairman Larry Estepp said land downtown generally sells for $30,000 to $50,000 an acres, and Phillips said a fair price for the foundry property was around $600,000 considering the land and a building on the property.
The board also discussed but took no action on the idea of the same rezoning, from M-2 to B-2, for the Supermarket Row area, including White’s Fresh Foods.
Fleming said the rezonings are the same as what the city did to the old Quebecor World plant and property, which Quebecor gave to the city last year.
Posted by douglassriverview at 10:22 AM