Douglass Alumni Board Meeting: Welcoming the Future Sons and Daughters of Douglass

The Douglass Alumni Association is off to a good beginning with the future D-B Ebony Club.

MORE PICTURES OF THE MEETING IN THE PHOTO GALLERY

Current Alumni Board of Directors President Doug Releford told the group of the visit he and former Ebony Club sponsor and D-B teacher Dawnella Ellis had, with the almost 50 future juniors and seniors this past week. 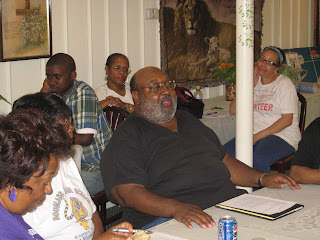 "We had a wonderful meeting," Releford told the group. "I also ran into (Principal) Lovelace after the meeting, and he told me he was very glad to hear that the Douglass alumni would be sponsoring the Ebony Club. He said, there would be no problem with that, and he was thrilled that we would be doing that."

"He also said, anything he could do to help us, to just let him know," said Releford.
"Those were very encouraging words from the principal."

Board member Wallace Ross, Jr. asked if there would be an inside D-B teacher involved, as in the past, and Releford said, "no, our organization would be the sole sponsor. The parents of the club members would actually be the ones involved with running the club." 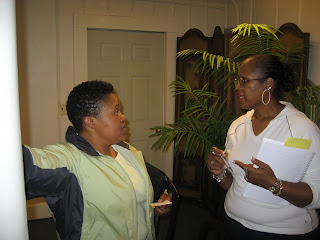 Both Monica Lewis-Patrick, who has a D-B graduating senior in the family, and Octavia Hampton spoke to the board about celebrations planned for the D-B seniors, and it was agreed that both of them would get together and coordinate their efforts together for one huge party celebration, to which the Douglass Alumni Association would help financially. The exact amount is to be determined at a later date.

Board member Ozine Bly says he'd heard of the D-B Ebony Club, but was unfamiliar with the workings of the former club. Dawnella told him and the group, the club was designed to encourage our young African-American students to promote them for excellence and achievement.. to give them their own club for a sense of belonging, since many of them did not belong to any of the clubs at D-B. 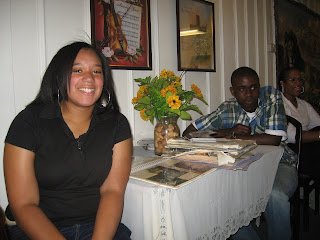 Virginia Hankins told the group, when integration happened in 1966, "our kids were lost. I was in the first class to integrate, and we went to Dobyns-Bennett, and we were lost. There was nothing for us, nothing planned for us to take part in. Later on, long after I graduated, they started the Ebony Club to give our students a chance to show off their talents and be involved in things."

Many of the former Ebony Club members in the group at the meeting, remembered the backing of Ms. Elizabeth Dudney, the first sponsor of the Ebony Club when it formed back in the 70's. "If she didn't know what we were about," said one of the former members, "she never showed it, because she was a great teacher sponsor, and if Dawnella hadn't kept us focused later, the club wouldn't have kept us on the right track." 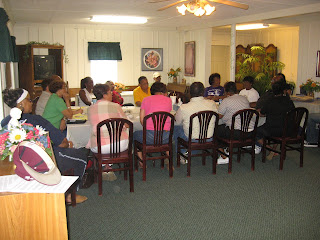 The board then agreed to wait on the meeeting about a celebration for the D-B graduating seniors, to be discussed at a later called meeting.

In other business, Virginia mentioned a past board decision to continue giving out Alumni Scholarships in off-reunion years, like this one.

"We need to decide how many scholarships we are going to give out this year, and how much each scholarship will be worth," she said.

"Since we don't actually pay the money directly to the schools until August or September," president Releford said, "we can come up with an amount and a time frame, based on how many applications and essays we get back in."

THE DOUGLASS SCHOLARSHIP FORM---APPLICANTS: CLICK ON BOTH PICTURES, PRINT THEM, FILL THEM OUT AND SEND THEM TO: DOUGLASS ALUMNI ASSOCIATION, P.O. BOX 1936, KINGSPORT, TN 37660 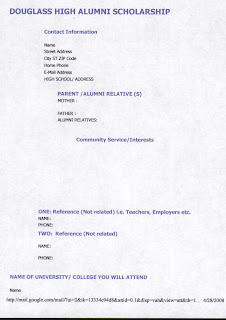 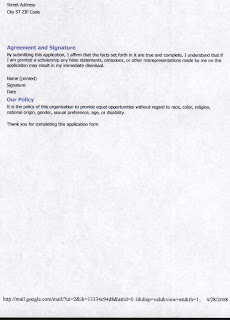 It was then agreed by the group, that as in the past, descendants of Douglass High School Alumni are eligible for the scholarships, and graduating D-B seniors will soon be getting applications like the one above, to send in to the Scholarship Committee for consideration.

Adjourning the board meeting, president Releford thanked the former Ebony Club members who attended, inviting them back and "don't make this your only meeting."
Posted by douglassriverview at 10:21 PM