The American Red Cross, United Way, American Legion and the Upper East Tennessee Human Development Agency have committed to locate their operations in the new nonprofit wing of the V.O. Dobbins Community Center.

THE MOST CHANGES TO THE OLD DOUGLASS SCHOOL WILL BE TO THE BACK OF THE BUILDING, FACING WHEATLEY STREET 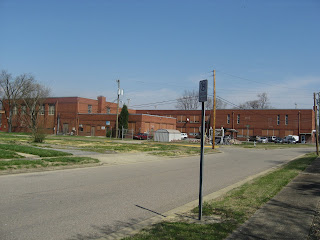 KINGSPORT — The city of Kingsport has determined the construction and operating costs for the new V.O. Dobbins Community Center and recently announced which nonprofit organizations have committed to the new project.
The V.O. Dobbins Center is a city-owned community center located between Louis and Wheatley streets in Riverview. The building served as Kingsport’s “blacks only” school from 1951 to 1966.
City and community leaders have talked about renovating the building for years, but recently the city put the project on its five-year capital improvement plan. Kingsport officials have budgeted approximately $5.7 million in city funds and plan to apply for $3 million in federal funds to make the project a reality.
During a recent Board of Mayor and Aldermen meeting, city leaders received an update on the project.
The project calls for demolishing 13,600 square feet of the existing building, renovating the remaining 46,000 square feet, and adding just over 50,000 square feet of new space. Conceptual drawings show a new 30,900-square-foot nonprofit center (a smaller, one-story nonprofit building is shown beside it), a new 10,000-square-foot gym and a new 9,000-square-foot two-story wing.
Improvements coming to the center include new windows, roof, HVAC system, restrooms, a new sprinkler system, paint and flooring, new lighting fixtures, and a new entryway into the building. A new playground is called for near the existing ball field, and James Street would be closed and converted into a parking lot. The plan calls for 153 parking spaces to be built for the center.
Chris McCartt, assistant to the city manager, said the cost of the project has been determined to be $8.7 million, which includes the city obtaining $3 million in new market tax credits.
The operating costs in the nonprofit wing of the center are estimated to be $5.10 per square foot, while the operating costs in the remaining part of the center will be $3.50 per square foot.
“I feel comfortable with these operating costs moving forward, and I think we have a very good project,” said City Manager John Campbell. “The big unknown is the final financing.”
McCartt said the city has commitments from four local nonprofits to locate their operations in the new nonprofit wing of the center — the American Red Cross, the United Way, the American Legion and the Upper East Tennessee Human Development Agency.
Up next will be for the architects to complete the final design and have the project reviewed by the State Fire Marshal’s Office. In August, McCartt said staff would return to the BMA with the findings of the new market tax credits.
Construction is expected to begin in the late fall and take approximately 18 months to complete.
“The subject has been discussed for a long time, discussed too long,” said Alderman Larry Munsey. “It’s time we stopped talking. We need to get on with it.”
Van Dobbins, whose father the center was named after, said the new center would be something for the future and for the youth of the community.
“It’s a good thing in our history right now. The city has been very supportive of the center from the get-go and ... everybody in the community has been supportive of what’s been going on,” Dobbins said. “We had some reservations, but the city has come on board great to support all the things that are necessary to help us move forward on this project.
“The way things are geared now, all we want to do is make sure that it benefits the people that live there and the city of Kingsport.”

SPECIAL NOTE: Please see the previous story on the BMA meeting..there are some additions to this article. The non-profit Douglass Alumni Association is also a new tenant in the V.O. Dobbins Community Center. The DAA is being alloted space in the community room for its offices, computers and furniture at no charge. Many Riverview and South Central residents were present at the BMA meeting last Monday afternoon.
Posted by douglassriverview at 10:18 AM