The Tennessee Historical Commission on Friday (2/19/10) approved a historical marker for Kingsport’s Douglass High School, which at the time of its closing in 1966, was the largest African-American high school in Northeast Tennessee, Southwest Virginia and Southeastern Kentucky. 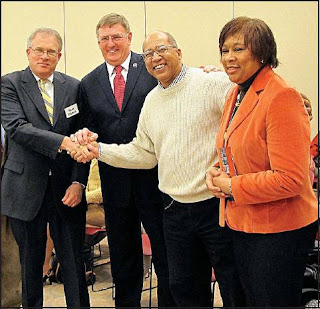 “This certainly means a lot to me and the many students who passed through Douglass High School’s doors,” said Calvin Sneed, a Douglass High School alumnus. “This historical marker will serve as a reminder to newer generations of their heritage, and as an advocate of preserving that history, I could not be more pleased with the commission’s decision.”
State Rep. Tony Shipley, R-Kingsport, was on hand for the meeting in Nashville.
The historical commission’s vote was unanimous.
“I had the pleasure of becoming friends with Calvin Sneed throughout this process, and I know this issue is very close to his heart,” Shipley said. “Calvin and I share a history common and not common — we grew up in the same community, we graduated high school about the same time, and we both went on to the University of Tennessee, but we never met until Calvin began this crusade. I am pleased that the commission approved the marker and look forward to knowing Calvin for years to come.”
Posted by douglassriverview at 11:27 AM