The Scat Cats on the prowl again on newly released CD

Soul music legend Evelyn Champagne King is a fan. So are jazz saxophonist Bobby Ricketts and jazz pianist Alex Bugnon.
And so am I. 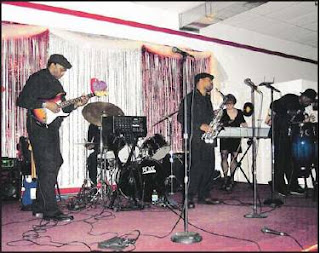 We’re all fans of the Scat Cats, Kingsport’s seminal rock-and-soul group.
The Scat Cats have been playing dances and parties around here since the late fifties when they were five young guys from Douglass High School.
The group recorded singles — on Spot Records, Sun Dance Records and even Columbia Records — over the years, but if you wanted to hear the Scat Cats, you usually had to go see them live.
Not anymore.
Just in time for Valentine's Day, the Scat Cats have released a CD. “Live from the Down Home” is 68 minutes of vintage Scat Cats, recorded at the Down Home in Johnson City on Sept. 21, 1994. Mookie, keyboardist and also spokesperson for the band, says, “It was recently found deep in the archives of a good friend and was cleaned up for us.”
It’s not all the original Scat Cats. But three of the five originals are on the recording: Kenny Springs, vocals, Arthur Flack, sax, and Donnie Flack, drums. Rounding out the group on the recording are Marshall Davis, guitar and vocals, and Brian Dennison, bass guitar. (Joe Manuel and Sonny Sanders were the other two originals.)
The CD is about half instrumental and half vocal, but oh those vocals. Kenny Springs had one of the smoothest voices around and this is probably his last recording. Kenny died in 2007.
So far sales have been by word of mouth. The group doesn’t have a retail outlet. Unless you count Mookie.
You can order by calling the band’s number, 306-SCAT. Or you can email the band at scwbb1@charter.net or through Facebook (enter “Scat Cats Wells Brothers” in the search box in Facebook).
Mookie says if you don’t live too far away she will deliver your CD.
The price is only $10 for what Mookie says is “68 minutes of pretty cool music.”
When it comes to the Scat Cats, the last cut on the CD says it all: “You Can’t Sit Down!”
SCAT CATS FUN FACTS
Did you know the Scat Cats were originally called Sunny Saunders and the Scat Cats? A 1958 ad in this news- paper headlined “Rock Rock Rock Rock” listed the band’s personnel as Sunny Saunders, Joe Manuel and Carolyn Rock! The ad was for a dance on Sept. 20, 1958, at the Civic Auditorium, with tickets on sale at Freels Drug, Wallace News Stand, Armour Drug, Palace News Stand, Shaffers, Sweet Shop and Gate City Pharmacy. (The ad misspelled Sonny Sanders’ name.)
In 1959, the group played a regular Friday night dance in Bristol at the Hamilton-Bacon-Hamilton Building on Commonwealth Avenue. It was sponsored by Bristol’s American Legion Post.
In the sixties, “Kenny Springs and the Scat Cats” released “Let Nobody Love You” with “Nobody Else But You” on the flip side on Spot Records.
In 1963, the group opened for Ray Charles at the Knoxville Coliseum.
I’ve posted a few old newspaper clippings about the Scat Cats on my blog, vincestaten.blogspot.com.
THE GUYS ON THE KRICK
I got a little more information about Horse Krickers, Eastman’s old kiddie club, from Ken Riddle. “The guy who founded and was behind Horse Krickers was Bob Delius, ‘Purty Bob’ as he called himself. He started it and named it after Horse Creek, which flowed on the Eastman property. His sidekick was Claude ‘Cosmo’ Griffith. Both men worked for Eastman in the recreation department. Thanks to Bob, Cosmo, John the projector guy, and all the others, they made our Saturday mornings happy all those long years ago!”
Posted by douglassriverview at 10:49 AM