The mural, featuring spiritual, education and business leaders from the community’s past, was produced in 2001 by artist Rhonda Clark.


KINGSPORT — A portrait of community and social leaders of the Riverview community has made a road trip to the Kingsport Renaissance Center for Black History Month.

Erica Yoon —eyoon@timesnews.net
Kevin Lytle and Stella Robinette reminisce about the individuals they personally knew and grew up with who helped shape history in Riverview. The Riverview Neighborhood Mural depicts individuals and sites with historic significance to Riverview and the greater Kingsport community. 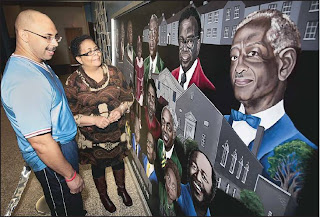 A mural featuring spiritual, education and business leaders from the community’s past produced in 2001 by artist Rhonda Clark is now on display in the center’s atrium along with several abstract and cultural pieces from local artists.
City of Kingsport Cultural Arts Administrator Bonnie Macdonald says the mural will remain at the center until renovations at the mural’s permanent home — the V.O. Dobbins Community Center — are complete in late spring or early summer.
“(Riverfront community leader Stella Robinette) had arranged to have such wonderful artists here for the special display that we thought it was appropriate to bring the (mural) over and celebrate it again and let people remember these leaders and their contributions to Kingsport,” said Macdonald.
The mural entitled “Uniting Our Spirits As One” is a product of the Catch the Vision project spearheaded by former Mayor Jeanette Blazier and features 17 individuals and former community landmarks of Riverview located along Lincoln Street. 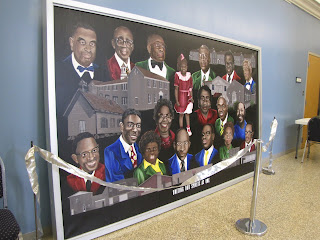 Among those pictured are:
• Paul Taylor, the owner of a much-visited grocery store in Riverview and former Eastman employee.
• Granville “Stick” and Walter “Brownie” McGhee, a pair of musicians who played blues and jazz at local stages.
• Former educators at Frederick Douglass School, including principal V.O. Dobbins Sr. and instructors Della Hendricks, C.C. Kiser, Mildred Davis and Cora Cox.
• Church leaders J. Bratton Gaines, William Stokely and James Turner, all of whom led their congregations for generations.
• Jalisa Ferguson, a 4-year-old who perished while caught in a drug deal crossfire incident in the Riverview community in 1994.
The center is also scheduled to host an entire day of events to celebrate cultural diversity, arts and historic culinary dishes during Black History Day on Feb. 27.
A headwrap design seminar, workshops for tap dance, step dance, drama, drumming, singing and an African cuisine sample bar will be featured during the day’s festivities, which begin at 12:45 p.m. that day.
The Claflin University Concert Choir from Orangeburg, S.C., will also have performances during the Feb. 27 event and a special concert prior to that on Feb. 26 at 7:30 p.m. at the Toy F. Reid Eastman Employee Center.
More information on the event is available by contacting Stella Robinette at (423) 276-6541, or by calling (423) 392-8417 or visit www.kingsportarts.org.
Posted by douglassriverview at 10:08 PM