The demolition of the Historic Riverview Apartments is finished..


CORNER OF MLK/LINCOLN AND LOUIS STREET 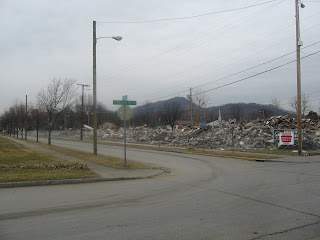 All that is left, is to haul away the debris of what is left of the 68 year old apartments, that have been home to hundreds of families over the years..

Next year, the 12-million dollar HOPE VI Redevelopment Project, along with four homes from Hope Build, will occupy the land the Apartments once stood on. 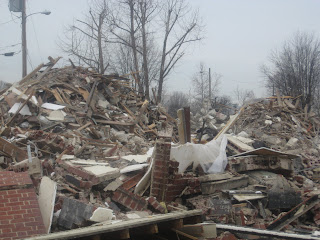 Until then, the land will be an open field, much like it was back in the 1930's, during the time it was the chemical dumpsite for surrounding industries.

In the PHOTO GALLERY, are pictures from the finishing demolition, some of them by Willie Hodges, who stopped by just as the excavator was finishing up the tearing down of the final apartments still standing.. Willie also gave a VIDEO NARRATIVE of what he was observing as the final apartments came down (you'll need the Adobe Flash Player to see that).. also, there are historical BEFORE and AFTER pictures of the apartments.
Posted by douglassriverview at 1:24 AM