KINGSPORT — Laynette Alley and Huetta Isom will take the next step towards what they hope will be a professional gospel singing career when they perform in concert Sunday at Central Baptist Church. 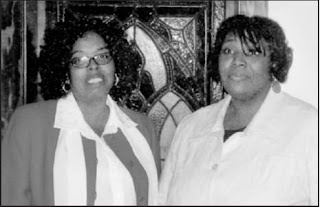 The concert will be recorded on video, which will subsequently be sent to the Bobby Jones Gospel program, which airs on BET. Those associated with the gospel program have shown in interest in the duo as has Music House Production in Nashville.
“I have recently felt that singing was the ministry that God was calling me to,” said Alley in a prepared statement. “I just want to sing and give glory to God.”
For Isom, singing “is my way of spreading God’s word to others.”
The two have performed as soloists but are performing together for the concert, “Unveiled Praise,” which begins at 4 p.m., with the Gospel Soul Lifters from Rockwood, Tenn., as guests.
The concert is sponsored by the Kingsport Cultural Diversity Team Inc. Allen Faulkerson, president of the Kingsport Cultural Diversity Team, serves as the duo’s manager.
Laynette Bly Alley first began singing as a child in the choir at her former church Lyons Chapel A.M.E. Church and while a student at Volunteer High School. In 1990, she married Reginald Q. Alley, and they became parents of a son in 1997. She is now a member of Calvary Church, Boones Creek.
Huetta Jane Collre Isom began singing with her three siblings and parents. She is the mother of four sons and a member of Jubilee World Outreach Ministries where she is a member of the praise team and choir. She has participated in gospel music workshops led by leading performers.
Admission to Sunday’s concert is free, but a love offering will be received.
Posted by douglassriverview at 10:27 AM