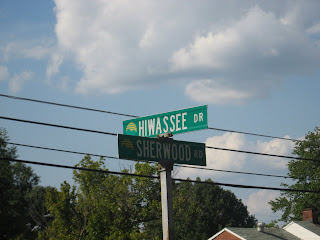 
SHERWOOD/HIWASSEE DIRECTLY TIED TO RIVERVIEW DEVELOPMENT WITH HOPE VI GRANT
24 affordable houses will be constructed in the Sherwood/Hiwassee area.

KINGSPORT — Bridgett Jones has lived in a Kingsport apartment with her 8-year-old son for the past eight years. As a result of the city’s HOPE VI revitalization project, Jones will soon become a homeowner for the first time in her life.

“It feels great. I’m very happy that I’m going to be a homeowner,” Jones said Tuesday. “I have an 8-year-old son who’s disabled, and I’m really excited for him. It’s going to give him a chance to have things you don’t have in an apartment, like a yard.”
Jones is one of the first area residents to take advantage of the city’s HOPE VI revitalization project. The project consists of two major phases — the demolition and replacement of Riverview Apartments with 32 homes (along with six additional houses in the South Central community) and the building of 24 affordable home ownership units in the Sherwood/Hiwassee area of town. 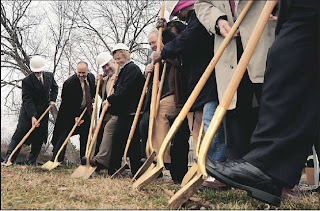 On Tuesday morning, the Kingsport Housing and Redevelopment Authority held a groundbreaking ceremony for the Sherwood/Hiwassee phase of the project.
City Manager John Campbell said you can’t have a great city unless you have great neighborhoods.
“One of the great thrills has been working with this HOPE VI project. One early life lesson I learned was growing up in a great neighborhood in Kingsport, and my wife spent the first seven to eight years of her life on the other side of Sherwood,” Campbell said. “It’s great to be able to do something back in this particular area.”
Helen Bunting, who was born in Riverview and lived there for the past 10 years, said she hopes to purchase one of the houses along Sherwood.
“They’re going to be nice, but everybody’s going to miss the (Riverview) apartments,” Bunting said.
HOPE VI Director Doris Ladd said all of houses along Sherwood/Hiwassee are expected to be built by September. The houses will be approximately 1,400 square feet and cost in the $130,000 range.
Ladd said the houses will be a story and a half; brick with vinyl siding in Colonial and Craftsman style; three bedroom, two bath; with a storage unit in the back yard.
The KHRA offered the houses to several hundred people — first to the residents of Riverview who were displaced by the demolition, then to other housing authority residents, then Section 8 residents, and finally those on the KHRA’s waiting list.
Ladd said five people have passed all of the hurdles and have applications for approval. One has been approved, and the KHRA is “pretty confident” the other four will be as well.
Down payment assistance and low-interest to zero-interest loans are available, based on income levels and if you’ve not owned a home in the past three years, Ladd said, noting the biggest hurdle has been with financial institutions looking at applicants’ credit rating, which is not in the KHRA’s control.
The HOPE VI project began about two years ago when the city applied for a HOPE VI revitalization grant from the U.S. Department of Housing and Urban Development. In October 2006, the city received $11.9 million in HOPE VI funds, and since then KHRA officials have been working on the project.
The entire HOPE VI project — both construction projects, the opening of the HOPE VI/Fresh Start office, and the purchase of property along Martin Luther King Jr. Drive — is estimated to cost at least $30 million. The $11.9 million grant is just part of the funding needed to complete the project.
The money will also be used for a new development along Martin Luther King Jr. Drive to house satellite offices for the Boys and Girls Club, a Kingsport Police Department substation, the Weed and Seed office, and Carver Library — all of which were located in the Riverview Apartments complex.
Demolition of the Riverview Apartments began earlier this month, with the contractors having up to 120 days to complete the work. New home construction in the Riverview community will begin in early 2009.
Posted by douglassriverview at 8:03 AM