The first Hip-Hop Fashion Show at ETSU was held Friday, as the last event of African American Arts Week. Prior to the show, a lecture was given by Demetrius Walker, co-owner of dangerousNegro clothing line. 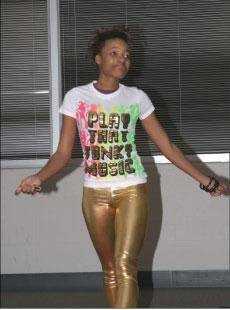 If the name dangerousNegro stirs feelings of uneasiness then it has done its job, according to Walker.
"The name gets attention but it also has a message behind it, like everything we do," said Walker.

The name originated as a term the government used to brand certain Civil Rights leaders such as A. Philip Randolph and Martin Luther King, Jr.
A disdain for complacency is why the government deemed them dangerous, and the same concept is the theme of the dangerousNegro clothing line.

Common, Mos Def, Wyclef and other celebrities have been seen wearing dangerousNegro shirts. Since starting the company in December 2005, Walker has traveled to schools across the country and discussed entrepreneurship with students of all ages.
Noticing a rise in the popularity of shirts with what Walker referred to as "ignorant messages like Dopeman, or I got it for Cheap," he began developing a clothing line to present positive messages.

"Clothes are the first thing you notice when you see someone, so we want to put forth something uplifting," he said.

After attending Vanderbilt, Walker graduated and entered the corporate world working for Dell.
Working within corporate America, he came to view it as a modern day plantation system.
"In my heart, I feel it's slavery," said Walker.
His employers viewed him not as Demetrius Walker, but as worker number 40991.

He continued to grow increasingly miserable "working the fields on corporate America's plantation."
The breaking point occurred when a supervisor chastised him for not taking care of a task during his break time.
His supervisor said, "When you are in this office, I own you."
Walker quit immediately.
"I saw this old slave auction flier from a newspaper from 1859," Walker said. "Valuable young negros, field hands, with no fault. It cost $1,600 to buy a man in the prime of his life. If you adjust that for inflation, that comes to around $32,500. Today, a résumé serves the same purpose as a modern day slave flier.

"We get brainwashed into thinking we go to school to find some glorious plantation to work on for 40 years then retire," said Walker, "but how fun is it going to be playing basketball when you're 72? Going shopping with the Louis Vuitton bag on the walker?"

Encouraging others to use their talent to the fullest, he discussed several key elements in starting a new business. "If you want to start a business disinfecting stripper poles, find out how and go for it," he said.
"Your network is your net worth," he said. "It helps to be friends with entrepreneurially minded people."

He also suggested being observant, and noticing what the corporation you work at does that makes it successful and allows them to issue paychecks every two weeks.
"You will probably have to work for a corporation for awhile to get money to start your own company," he said. "But you should set a date in the future. Save up enough, and make your run from the plantation."

Walker told students to use their potential. "The only person who can stop you is yourself."
Following a catered reception, the Black Affairs Association (BAA) presented the Hip-Hop Fashion show. A red carpet had been placed parting the crowd, with strobe lights along the runway.
DJ Nize provided the soundtrack for the evening while Devin Logan hosted the festivities.

Students in BAA served as the models. The first round featured a wide variety of styles being displayed ranging from Hollister to gold spandex pants. One participant even sprayed her hair pink to match an outfit.
The models changed into their clothes for the second round and with the crowd having tripled since his lecture, Walker briefly recapped some of what he had mentioned earlier for the benefit of the new arrivals.

The second round showcased some items from the dangerousNegro line. Some of the sayings featured on the shirts included "Educated black man - take one home today," "Smart is the new gangsta," "Power to the people" and "Young gifted black."
While the models prepared for the final round, Devin Logan read a list of fashion rules for dressing at ETSU. Some of the tips included "If you only have two teeth, neither should be gold," "Do not wear flip flops in the snow" and "Don't suck your gut in. If you're a size 16, please do not wear a size 7."

The final category was "grown and sexy" and consisted of evening and formal wear. Three-piece, pin-striped suits and formal dresses made up the majority of items showcased.
The ceremony ended with BAA president Ash-Lee Henderson presenting advisor Lettee Harris with a bouquet and thanking her for helping to make African American Arts Week a success.
Posted by douglassriverview at 8:17 PM