ON THE VERY SPOT WHERE THE REVEREND DOCTOR MARTIN LUTHER KING WAS ASSASSINATED IN MEMPHIS ALMOST 50 YEARS AGO, MEMBERS OF THE SHILOH BAPTIST CHURCH LOOK OUT THE WINDOW AT THE SCENE It was a very moving experience.

Those words from members of Kingsport's Shiloh Baptist Church, who journeyed to Memphis, Tennessee to take part in the "Black History and Friends" program at the Central Baptist Church of Memphis, whose pastor is Dr. Reuben H. Greene. The theme of the event was "Preserving Our Heritage."

While in Memphis, the group took a tour of Memphis attractions, including the former Lorraine Motel downtown, where Dr. King was shot to death on a motel balcony on April 4, 1968. The motel is now the National Civil Rights Museum.

Louetta Hall says, just standing on the balcony where the civil rights leader was assassinated, one could almost imagine what happened there.. could almost feel Dr. King's spirit.. she says, she and others were almost in disbelief that his life was taken for something he believed in. She reports the museum has tried to preserve the scene exactly the way it was when Dr. King and his aides were staying there.. cigarettes in the ashtrays, coffee in cups, the same newspaper that Dr. King was reading moments before he stepped outside on the balcony. 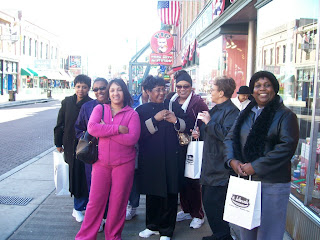 The group also went shopping at A. Schawab's Variety Store, where Louetta says, Shiloh pastor Dr. Kenneth Calvert told them "if you can't find what you're looking for at Schawab's, you don't need it." They also took in the legendary Beale Street, nd the ducks who do their daily parade to their pond at the reknown Peabody Hotel.
Posted by douglassriverview at 10:43 PM