The 92 Riverview apartments will be torn down to make way for 24 single-family homes and eight duplexes. 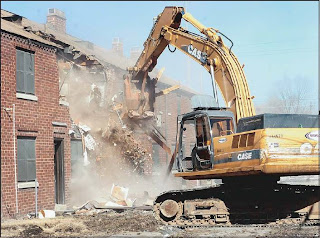 TOP LEFT, Demolition work began Saturday at the Riverview Apartment Complex. MIDDLE DOWN, former Riverview residents join in the walk over to the Riverview Apartments to watch as the demolition begins. BOTTOM, Calvin Sneed, a member of the Sons and Daughters of Douglass and Riverview Residents Association, is joined by others in a tearful farewell to the historic apartments. .

KINGSPORT — A mix of emotions were seen on the faces in the crowd who watched the beginning of a demolition project that would soon claim their former homes.

The group of about 130 people gathered at noon Saturday at V.O. Dobbins Gym to remember the good times residents had at the Riverview Apartment Complex.
The apartment complex built of brick, concrete block and steel was first opened in 1940.
Many of those first tenants watched a demolition claw tear into apartments 26 and 27 Saturday.
It took only minutes for the hydraulic wrecker to remove the top floor and roof of the apartments. From the debris, residents were ready to collect bricks as mementos, while others pried the metal address numbers from the front of apartments they had known well.
The demolition of the apartments represents a sad time for those with fond memories of the community spirit they felt while living in the complex.
“It was a place where there was a spirit of togetherness,” said Calvin Sneed, a member of the Sons and Daughters of Douglass and Riverview Residents Association.
“Riverview was a place where anyone could go to a neighbor and ask for sugar, milk, corn, meat... anything,” he said. “You could make a whole dinner just on what you borrowed from neighbors.”
While Riverview had its share of crime, Sneed said the same could be said of Bloomingdale, Lynn Garden and Ridgefields. 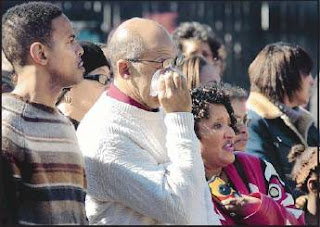 “You can tear down the historic Riverview apartments, but you’ll never tear out the soul that we put into the Riverview community,” Sneed said.
Sneed noted that the demolition is making way for a new phase in Riverview’s history.
An $11.9 million HOPE VI grant from the U.S. Department of Housing and Urban Development is being used to build low- and moderate-income housing at the site. The 92 Riverview apartments will be torn down to make way for 24 single-family homes and eight duplexes.
Posted by douglassriverview at 9:26 AM