Less than a week after demolition began at the Historic Riverview Apartments, signs of the times are already visible.

MORE PHOTOS FROM THE NEW DEMOLITION IN THE PHOTO GALLERY 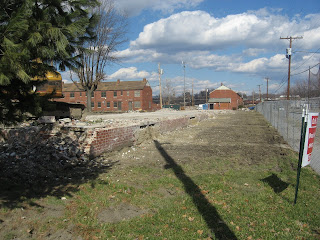 Gone now is the unit that once housed Apartments 81 to 86 at the corner of Louis and Douglass Streets, and the unit directly beside it that once housed the next set of apartments, 87 to 92. Only the foundations remain of the former Apartments that once stood there. Eventually, the foundations, too will be dug up and hauled off. Also gone is the Historic Carver Library, whose mightly steeple was scheduled to be saved. 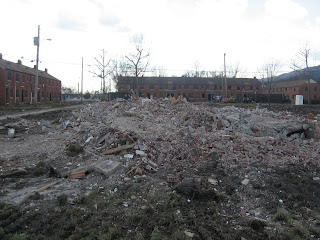 Also gone now is the unit that once housed Apartments 25 to 32 on MLK/Lincoln Street. That unit was the beginning one that started the demolition last Saturday, February 2nd in front of former apartment residents, Riverview residents and business and community leaders in Kingsport.

"The demolition is a two-fold process," says Chris Scissom, one of the demolition project managers for the D.H. Griffin Wrecking Company. "First, we have to do the environmental effects, because there is some asbestos involved. The asbestos in the concrete flooring has to be removed carefully first, hauled away and environmentally disposed of. Then, we strip the buildings out and tear them down with the excavator."

"While we are doing that," says Mr. Scissom, "we will separate the recyclables. My company, D.H. Griffin is a 'green' company.. we like to recycle as much as we can, the brick, the metal, the steel, the word and the other things that are recyclable.
The concrete below can be remade into a road bed for example, or beneficial fill in a low-lying area."

SITE WHERE THE HISTORIC CARVER LIBRARY ONCE PROUDLY STOOD 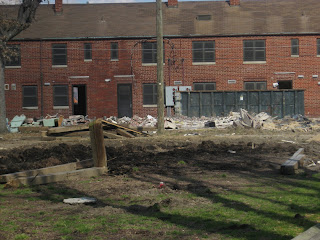 "You have to know your building," according to Mr. Scissom. "There's a process, which might look difficult to somebody not familiar with it. Every building has its own personality, its own character and quirks, and you gotta be aware of safety factors while sorting your debris piles. For example, 'if I take THIS down, will the roof sit up so I can take down or peel other things within the building that won't damage the recyclables inside or outside."

Mr. Scissom admits there is a lot of sadness associated with the tearing down of the Historic Riverview Apartments. "Remember when your son took his first steps" he relates. "You have the memories of that, even though the place where he did that, is no longer standing. But you always that focal point where that building existed, so you can look over and say 'that's where Jimmy took that step. These buildings (pointing to the Riverview Apartments) are going away, but that memory is going to always be there. You've only lost the focal point." 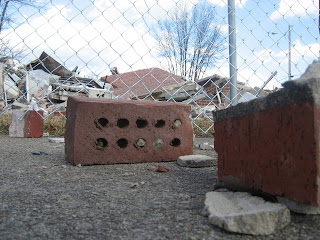 He also acknowledged that a lot of people want to keep a brick memento from the apartment they once lived in. "I've given away a couple of hundred already," Mr. Scissom says, "even a couple for Kingsport Mayor Dennis Phillips. It's very important to the residents. As for me, I'm a little detached from the buildings myself, until you speak to the public about it. Once you speak to them, you do get a little attached to them because you understand where they are coming from and what the buildings mean to them. It is important to them, and now it is important to us as contractors. We'll stop what we're doing, to save a little piece for them. Despite the job we have to do, it's important for us as workers to be gracious to the community. 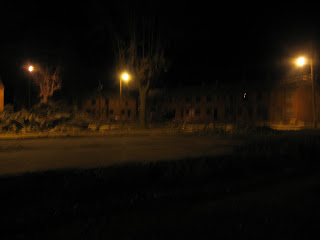 But one thing's for sure, says Mr. Scissom.

"Once (the apartments) are torn down and the debris hauled away. they're gone forever. All that will be left will be the memories 'over there where those new houses are, that's where we used to live."
Posted by douglassriverview at 4:14 PM