‘Part of our life is going to die’

‘It’s not just apartments. These are homes. These are places that touched people’s lives.’ — Calvin Sneed

KINGSPORT — The demolition of Riverview Apartments is a historic time for the Model City, as one of the oldest public housing complexes in Kingsport ends its 67 years of service to the city. The demolition is also a memorable time for former residents, who have mixed emotions about their onetime homes being torn down.
Kingsport is planning to replace Riverview Apartments with 32 singlefamily homes and build six additional houses within the Riverview community. The Times-News spoke with several former residents of Riverview, some who grew up in the apartments in the 1950s and 1960s and some who lived there up until the recent relocation effort. 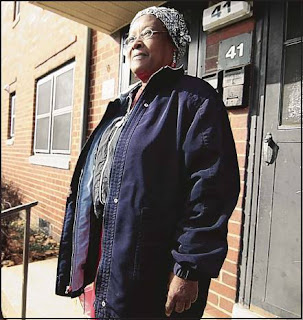 “It’s not just apartments. These are homes. These are places that touched people’s lives. There were friendships forged there, and there were neighbor relations forged there. I think it enveloped everybody as a big family,” said Calvin Sneed, who lived on Dunbar Street from 1959 to 1972. “Riverview has such a storied history, in terms of the people that came there, that came to work, that came to raise families, and that came to have their kids educated.
“When we had a reunion for the residents of Riverview Apartments recently, I said just imagine what it was like 70 years ago.”
Sneed is the senior news anchor at WTVC-TV Newschannel 9 in Chattanooga and the webmaster of the Douglass High School Alumni Association. DHS was located on Louis Street and served as Kingsport’s “blacks only” school from 1951 to 1966. The school is now the V.O. Dobbins Center.
Sneed went to DHS for six years before the school closed, and he has long ties to the Riverview community. His grandparents lived there, and his mother’s family, the Staffords, were one of the neighborhood’s oldest families.
Sneed’s mother taught at DHS — hired by V.O. Dobbins — and his father owned Sneed’s Cleaning Service and served on the city’s planning commission.
The Douglass Web site includes information and a history of the school along with pictures and news on the Riverview community and the HOPE VI project. Sneed said he started the Douglass Web site about a year ago to help keep the heritage and legacy of the school and the Riverview community alive.
“Nobody had any idea (the site) would take off, and it’s turned out to be a community outreach between neighbors and families who live far away,” Sneed said. “We want to keep the legacy, heritage and history of our neighborhood alive, but not just for us. We may not be here that much longer. We want it for the young ones coming up to remember, that this is part of your heritage.” 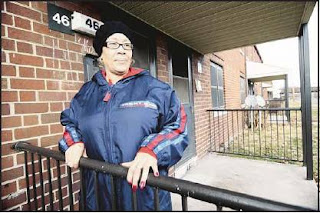 Johnnie Mae Swagerty came to Riverview Apartments in 1959 and stayed there until 1966 — in Apartment 79. Swagerty said she loved growing up in the apartments.
“I enjoyed it. I made a lot of friends. My family grew up there, and I just had a good time. The schooling was good. Everybody knew everybody, and if somebody disciplined me, it was all right,” she said. “There wasn’t any child abuse back then; it was discipline and respect.”
Swagerty and Sneed called Lincoln Street, “Swingin’ Lincoln” and remembered it was commercial row for the Riverview community and included a couple of grocery stores and restaurants (Midway Grocery, Dairy Mart and the Del Mar), a barber shop and dry cleaners.
“You were pretty well selfcontained,” said Ozine Bly, whose mother, Gladys or “Momma Bly,” used to read to and look out for the children in the neighborhood. “She made everybody feel special. Whoever was around, she made them feel like they were the only ones.”
Mary Beatty was born and raised in Apartment 11, delivered by a midwife in 1942, and she remained until 2007 when she decided to look into moving into a house.
“You didn’t have to go anywhere to buy something to eat. You didn’t have to go out of Riverview for anything,” said Beatty, who adds she would like to see the community keep the name “Riverview.”
Other fond memories include the Rev. Curtis Edge, who operated a store and restaurant on Lincoln Street and who once a year would feed the whole neighborhood his signature cheeseburgers and hot dogs. During the school year, Sneed said students would race to his restaurant during lunchtime as soon as the bell rang.
“I remember the community parenting,” Bly said. “Anybody would jerk you up and give you an adjustment, and that was one of the great things.”
Where the Carver Library is located, there used to be an open field, and families would use the area essentially as a farm — there were barns and smokehouses, gardens, cows, goats, hogs and chickens.
Unbeknownst to many people these days, residents during the 1950s and 1960s could also take in a movie in the neighborhood drive-in, which faced Riverview Apartments. And the Riverview neighborhood had what Sneed called an unofficial playground — Clay Hill
“It’s an area behind Dunbar Street and Industry Drive, now owned by General Shale. Back then you could leave your homes, your street and school and go up on Clay Hill,” Sneed said. “People built doghouses up there, camped up there, roasted marshmallows, swung from the trees, blazed paths.”
“Got their first kiss up there,” said Swagerty.
“Unbeknownst to us, General Shale used that area as a dump for its waste from making bricks,” Sneed said. “You’d be walking around and see big puddles of white stuff. There were old machines up there, old kilns, loads of bricks. We had everything but a jungle gym.”
Louetta Hall lived with her grandmother in Riverview until 1977 and remembers a time when you could leave your house, go downtown and not lock your doors.
“You came home and found everything as you left it. In the summertime you could sleep with your windows and doors open and never had any fear about anybody coming in and stealing anything from you,” Hall said. “It just shows you how times have changed.”
Sneed said parents weren’t afraid to let kids go out and play in the yard and in the street because they knew they were safe. They knew other neighbors were keeping an eye on them.
“We just don’t have that nowadays,” Sneed said.
Over the years, Riverview took on a negative connotation with stories of arrests, drugs and violence, most recently with the shootings and fights at Club 229.
“I have a feeling why Riverview got that (connotation) — television and newspapers. People would see pictures and hear things going on in apartment complexes in Atlanta, Nashville and Charlotte, and people automatically assumed Riverview. Sometimes it was Cloud and Lee, but everybody put the negative connotation to Riverview,” Sneed said. “Everybody just looked at Riverview and said that’s the problem. It was true to a certain extent, but not as much as everybody thought.”
To help address the drug problem, the city established a police substation and cameras in Riverview Apartments along with a Weed and Seed program. The HOPE VI project will also obviously transform the neighborhood, a move these former residents say will be bittersweet.
“You’re going to be sad the houses are gone, and you’re going to lose a lot of memories,” Bly said. “Looking to the future and young people with incomes moving in with the possibility of buying homes, it’s going to be different.”
Beulah Banner came to Riverview in 1953 and said she never thought about moving out.
“It broke my heart when they said they were going to do this because I asked them why would you tear them down? They said they were outdated. I said you should have done it right the first time and you wouldn’t have to tear them down,” Banner said. “It’s hard to see it torn down. I almost cried when the trash truck recently came in.” 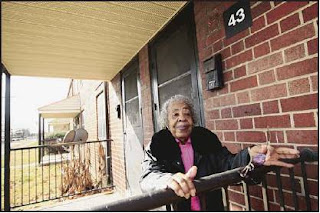 Mamie Gillenwater said her family was the first to move into Riverview Apartments back in 1941. At the time the family paid $9 rent, $1.50 for a phone and had one good light in Apartment 12. Her phone number was 2196-W.
“I really don’t like (the demolition) because Riverview was like home to me. When they had my picture taken I started crying,” Gillenwater said, noting she plans to come to Riverview when the houses are built. “Because it’s just home to me over there. That’s the only place I ever moved into in Kingsport that I ever cared about.”
Demolition of Riverview Apartments could take up to 120 days to complete, and work to build the new houses is not likely to start until 2009.
“When they tear them down, the field will be open for a while, probably a year. That’s going to be like an open wound,” Sneed said.
“Tears may endure for a night, but joy comes in the morning,” Hall said, quoting Scripture. “We’re looking for joyful things to happen in the future ”
The demolition will be “like death,” Swagerty said. “It’s like we’re getting ready for a funeral. We’re going to cry and then there’s going to be some laughs.” Sneed sees the HOPE VI project as a type of rebirth for the Riverview community.
“Part of our life is going to die when that wrecking ball starts swinging. On the other hand, there’s going to be a rebirth of a new spirit that we used to have there in Riverview, that makes people want to bring the familytype atmosphere back again. “That’s going to be a welcome sight.”
Posted by douglassriverview at 9:21 AM