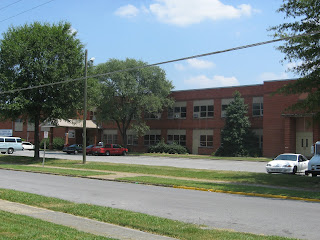 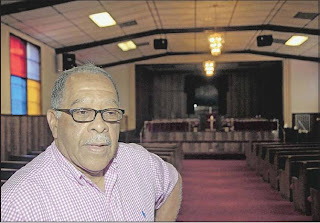 Now, 43 years after students entered the doors of Johnson City’s previously all-white elementaries, the buildings that housed those little schools are maintaining a legacy that recalls the best of what Dunbar and Douglass elementaries were all about.
With Grace Temple Church going strong more than two decades into its occupation of the former Dunbar, and the Boys To Men youth program mentoring young Johnson Citians inside the walls of Douglass, local residents who attended the schools have taken time to reflect on the days before integration.
Before they had a house full of kids in the 1960s, Carroll and Shirley Murphy couldn’t have predicted that in the midst of raising them, the long tradition of segregated schools would end. It was a tradition that, for all its negatives, offered some pluses as well, Carroll Murphy says.


PICTURED IS THE DUNBAR ELEMENTARY CLASS OF 1944 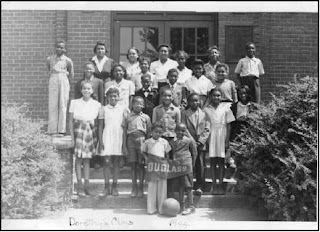 “I had wonderful teachers,” he says. “I can name almost every teacher I had there. I think for the children’s sake it was positive because it was like having two sets of parents, school and home.”
That refrain echoes in the memories of Shirley Murphy, who attended school in Elizabethton, and with Georgia Gillespie, who went to Dunbar, where longtime principal Priscilla Owens ran a tight ship. Gillespie also attended Langston for one year.
“It was definitely a closer student-teacher relationship because the teachers knew everyone,” Gillespie says. “And they seemed to care more — they would tell your momma on you after school.”
Shirley Murphy says that approach may have been especially helpful for children whose home lives weren’t the best.
“The teachers were like their mentor,” she says.
Still, all those positives were occurring within a system that imposed the equivalent of apartheid on public education. And “separate but equal,” Carroll Murphy and the others say, was a myth.
“All the books we got were ones the other schools had used,” Murphy says.
“The one year I did attend Langston (Gillespie finished high school at Science Hill) it was like one big happy family,” Gillespie says. “We had used textbooks and used band uniforms, used everything, but we made it.”
The Murphys were obviously pleased when, in 1965, they sent their children for the first time to integrated schools.

PRICILLA OWENS WAS THE LONGTIME PRINCIPAL AT DUNBAR SCHOOL 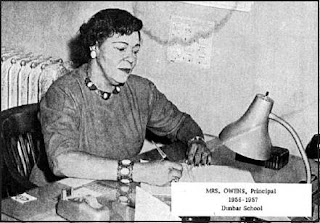 Sadly, though, some of the positives from Dunbar, Douglass and Langston didn’t survive the change. Many black teachers weren’t offered jobs in the system.
“It was the black teachers that lost their jobs, not the white teachers, and they could have used them if they wanted to,” Carroll Murphy says.
One teacher who did stay on with the system was Mildred Goines, who had also gone to Douglass and then Langston, where she graduated in 1937.
She taught music, library and other subjects at the same school she had walked to from her home at 218 E. Myrtle Ave. in the late 1920s and early ’30s.
Goines remembers selecting her profession at the tender age of 5.
“I just wanted to be a teacher,” she says. “It was a great sacrifice, but that was what I wanted to be and I stuck with it.”
It wasn’t until Goines received her master’s in 1970 that she was attending integrated schools. She completed Swift Memorial Junior College in Rogersville, then began teaching while working toward her bachelor’s (which she completed in 1949) at Tennessee A&I (now Tennessee State University) in Nashville.
As for the fairness and value of segregated versus desegregated schools, Goines, who saw teaching colleagues released when the schools integrated, isn’t eager to say much.
“There was pro and con on both sides,” she says.
Around the time Goines moved from Douglass to Langston, the 1934 graduating class of North Junior High complete a civics project — “Know Our City” — revealing that the “Colored Schools” were built in 1907 (Dunbar) and 1921 (Douglass). The report listed enrollment at Douglass (the schools went through eighth grade) at 86 and Dunbar at 293.
The former Douglass building has once again become a scene of community as the home of Boys to Men/Girlfriends.
Its director, Michael Marion, says he hopes to build on the legacy of desegregation with the programs that now serve about an equal mix of white and non-white youngsters.
BTM recently led a trip to the Civil Rights Museum in Atlanta, which also hit some historic locations from the Civil Rights era. Marion said the event was very instructive.
“It’s great for kids to be able to see that life has changed and that their grandparents have made that difference, and they can continue to carry on that legacy of accepting and building a better place and not putting up with injustice,” Marion says.
He says desegregation, while absolutely the right thing, led to “a lot of schools losing that value of being a center of community where people gather together intergenerationally, build relationships, prepare for the future.”
“I like to think that we will become once again a center of community ... where children can learn the values of their community, learn how to give back, learn how to prepare for the future and to be part of a community. ”
“We can continue building on that legacy of desegregation, but do it in a school that was segregated.”
The Murphys say they hoped integration would open a new dimension of opportunity in education, and they believe it did. Their children all have good jobs and have had career opportunities that they didn’t, and when their oldest daughter, Angela, pursued her interest in cheerleading from North Side Elementary School through Science Hill and the University of Tennessee, she was accompanied all the way by two white friends.
“I felt that my children got the same education as any other child in Johnson City, and that was all the people wanted,” Carroll Murphy says.
Posted by douglassriverview at 10:43 AM