The Lord was definitely in control at the Douglass Ballfield Friday and Saturday, August 8 & 9.

The event was called "CBS Alumni presents: It's Not About Us, It's About Jesus. In The Spirit, Say Yes! Jesus, Eternal Life."


PICTURES FROM THE CBS GOSPEL EXPLOSION ON SATURDAY, AUGUST 9TH IN THE PHOTO GALLERY 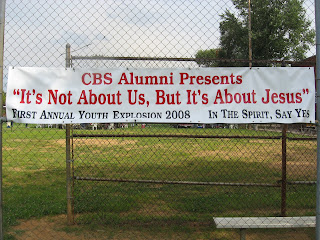 "We wanted to promote a higher level of spiritual education, of life with God, so people can continue to grow up in the Lord," says Gospel Explosion coordinator Lisa Williamson.

There was plenty of singing and praise dancing at the event, sponsored by the Central Baptist Singer Alumni, and the New Vision Youth Kids.

Many groups took part in the Gospel Explosion, including praise dancers "For His Glory" and "Anointed."

"I had heard so much about 'Anointed,' says Lisa, that I just had to get them in concert here. They have definitely got the right name 'Anointed,' because I knew it had to be the Lord that put them in my heart. They got the crowd involved in the Spirit." 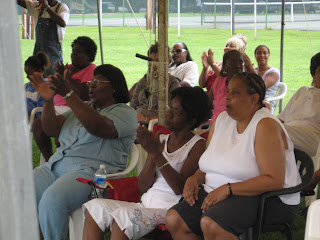 This is the first year for the CBS Gospel Explosion, and Lisa says she'll have the same theme for the next three years, as the event catches on and grows in popularity.

Many visitors say they'll come back, including Mary Welch of Kingsport. "I think it's a blessing for the community as a whole, to see and hear different groups singing and dancing," she says. "I enjoy coming out and giving Praises unto God, because that's what it's all about, giving the Glory to Him and acknowledging Him through song and dance. I also enjoy someone who can take secular music and inserting the name of God in there, or Jesus or Jehovah. I think that takes a special kind of talent."

The person she is speaking of is Jevan Martin of Bristol's Open Door Full Gospel Church. Jevan's specialty is rapping to the Word of God. "It shows people that you can still make good music and make it positive. People tell me all the time they never imagined that rap music could be done like this, but it does open their eyes to more than just what's on TV and radio." 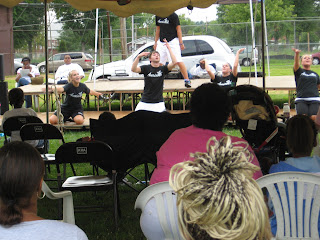 Just like the Spirit puts words in Jevan's actions, the popular dancers "Anointed" wowed the crowd with their popular numbers. Food was also provided, and the event was well-attended.

"It's important to have to these kinds of events in the community," Lisa says, "because Kingsport, Johnson City and Bristol are just too small for all the rampaging and rebellion of the children. It's up to the Christians to call these chidren back to the fold, to plead the Blood of Jesus over their lives, so they will not have to endure all the ruggedness that's going on in the world today. It is our responsibility to bring them back."

"They are our future."
Posted by douglassriverview at 1:11 AM