From Canton To New Canton: From Slavery To Bravery

THIS WEEK, WE ARE COMMEMORATING THE NEW CANTON REUNION BY EXPLORING THE LEGACY AND HERITAGE OF AFRICAN-AMERICANS FROM ROTHERWOOD TO ROGERSVILLE, TENNESSEE--WE START IN THE NEW CANTON COMMUNITY

Netherland Inn.. Rotherwood.. The Canton Hall Plantation and Hord's Mill at what is now New Canton.. Zion Hill at Surgoinsville.. Needmore.. Guntown and Petersburg at Rogersville. 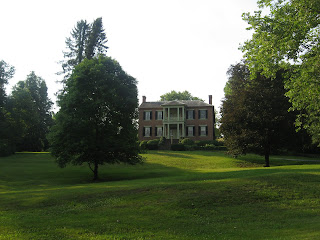 "There were probably more slave towns before the Civil War between the Netherland Inn at King's Port down to Rogersville, than anywhere else in East Tennessee," says William (Bill) Lyons of New Canton in eastern Hawkins County, Tennessee. Mr. Lyons says his ancestors used to tell him what THEIR ancestors told him about life in servitude on plantations in the eastern part of the county.

Records from the Hawkins County Courthouse and the Tennessee State Archives indicate that many of the plantations in that area had anywhere from 10 to 20 slaves, to upwards of 300 slaves. Back then, slaves had to be up front with their activities, but they were secretive about their lives when not working for the slave masters. 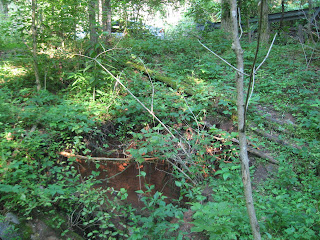 "Most people don't know about the cave that the slaves used way back," he says. "The opening is between Canton Hall and the Hord Mill, and it ran all the way south to the Holston River, about a mile distant. It was so big you could stand up in it and walk along the cavern. Legend has it, that slaves would use the cave as a passage from the plantations to go down to the river and fish and hunt. They'd bring their food back through the cave to their homes and families."

"I always heard that they would use the cave, so they wouldn't have to cross the railroad track or the main dirt road and be seen by white people, who would take their food away from them," Mr. Lyons remembers. "That cave and tunnel stayed there for many years, in fact, my uncle has told me time and time again that he and a white friend of his, would also go through the cave down to the river to fish and trap game."

WHAT'S LEFT OF THE CAVE ENTRANCE 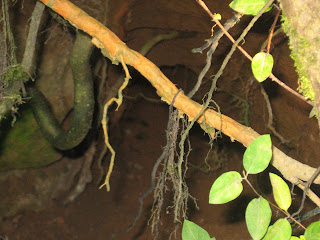 "When they built the new four-lane 11-W," he says, "the blasting for the road caused the cavern to cave in. Nobody ever went through it again, and as a passage, it was lost forever. Only the spirits of the slaves and their descendants long ago, know of the legacy of that cave."

What's left of the cave is near the land Mr. Lyons farms and lives on now, part of the land his great-grandfather actually bought from the Hord and Canton slave owners nearby.

Turns out.. his freedom came along with it. 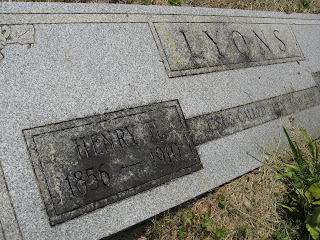 "My great-grandaddy was Henry L. Lyons," says Mr. Lyons. "He was from Stony Point along the Holston River, and was 57 years old when he was freed from slavery. He paid 25 cents every once in a while to buy the land. There was also a movement he'd found out about in Nashville to free the slaves by simply buying their freedom, and he also paid 25 cents into that. He saved enough until he could buy his own freedom, and from the paper I have on him, it looks like he was paying so much per month for the freedom of other slaves around here, too. His wife was Cornelia, who had been a Galbreath, and they raised a big family here." 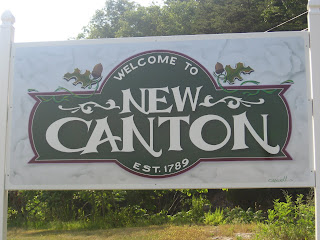 So how did New Canton get its name?

"The story goes, that when the slaves were freed after the Civil War, many of them did not know what to do or where to go," says Mr. Lyons. "They decided not to go anywhere, but to stay where they were the most familiar. Since they lived near Canton Hall, they named their old slave town "New Canton."

"Back then, freed slaves knew nothing of their own names, so they took the names from their former masters," he says. "Lyons, Hord, Leeper, Galbreath, Price, Cox.. those were all names of slave owner families in this area. Those freed slaves also established churches between Rotherwood and Rogersville. There was an African Methodist Episcopal church in New Canton, one in Zion Hill, and also one in Rogersville." 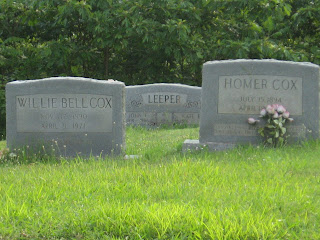 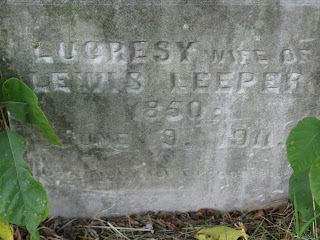 There were probably 50 families that descended from slaves that lived at one time in the New Canton area alone. Mr. Lyons says although many families stayed behind, some freed black slaves moved away, and when they did, the former white masters came in and took their land, even selling it to other whites in the area. There were only dirt roads and paths to the small farms. Even to this day, he says, the population is about 50-50, reflecting where the land has gone over so many, many years.


NEW CANTON ROAD--BAYS MOUNTAIN IS IN THE BACKGROUND 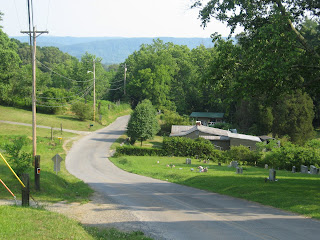 "New Canton was a self-contained community back around the turn of the century and well into the 1930's and 40's with the little branch running through it," says Mr. Lyons. "Before I was born, my family owned one of several grocery and community stores on or near New Canton Road. It was called Lyons Store, which had a little restaurant in the basement. John Ford also had Ford's Grocery and Grill, there was Hoskins Grocery. It was sort of what Riverview was like in Kingsport at around the same time. My mom used to talk about the only entertainment being whatever was going on at church on Saturday nights. The rest of your time was taken up with work, school, or just talking with friends, relatives and neighbors nearby."

TYPICAL NEW CANTON HOME-STORE: HOME IN FRONT, STORE IN BACK 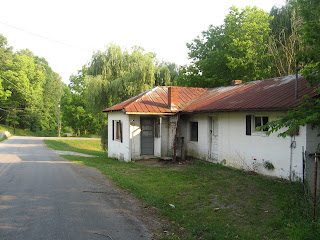 George Dulaney remembers those stores, especially the Lyons Store. "They had a little monkey that kinda watched the store for them.. let them know whenever somebody came in, or got agitated if it felt something was wrong with somebody who'd come in. He says that community spirit carried on in the New Canton community well into the 40's and 50's. "The churches were the main thing," he says. "people looked to the churches here for everything, fish fries, entertainment. The churches like Lyons Chapel held the community together. Over the years, most of the families here only had one or two children, and when they grew up, they all moved away."

Many of the reasons the younger ones left, would be a spirit outside the close-knit community that shows, no matter how different things are these days, in some ways.. they're still the same. 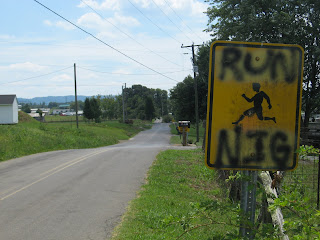 This example of the old harrassment is not from the 40's and 50's.. it's from 2008, very near the New Canton community right now.

"When I was growing up in the 40's and 50's," says Mr. Lyons, "there were places you could go to, and places you didn't go to. The closest place for us to shop was Kingsport. we knew not to go into Kress's, Woolworth's, any downtown store that had a restaurant. When you went to the Greyhound Bus Station on Main Street, you could go in and get a hamburger where you bought your tickets, but you had to stand up to get it, and then go back outside to eat it. I remember the little small place where the black people would sit down and wait on the bus. When it got there, of course, you had to sit in the back." 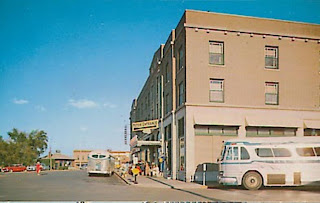 "There were work buses at the bus station, that brought black workers from the Kingsport workers down into Hawkins County to the plants there. Holston Defense was running pretty good, and many of those black workers would walk up New Canton Road to come to the stores and restaurants that were black-owned. I used to sell kindlin', greens, just anything I could find to sell."

"We didn't really have quite as much controversy in blending in with whites as the other larger towns we were hearing about," he says. "That's probably because many of the whites in the area were just as poor as we were."

"When we really wanted a treat," he says, "we'd go to that drive-in theater on the other side of Riverview in Kingsport, and we'd run into other black people who would sneak into the drive-in. Whenever we would come in a car, we could not ever leave the car to go to the concession stand, so we'd have to bring our own stuff. My mom used to pop popcorn, and wrap ice around those big tall bottles of Pepsi-Cola. Being separated from the white people was a sign of the times, but we had fun anyway."

"Funny thing though," he remembers. "me and my daddy owned our own business where we made those sanitary sewer manholes and catch basins. 95 per cent of our workers were white, but we could only be seen working with them, never having fun with them. Later, I ended up being the first and only black concrete contractor at Tennessee Eastman for a while." 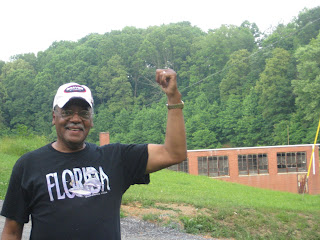 The old New Canton School is now a big focus of the people in the community. "After it closed as the all-black school back in the 60's, the Head Start program out of Rogersville took it over for a while," says Mr. Dulaney. When that fizzled out, it closed up for good, and kinda ran down. It really started falling in with no attention and no maintenance. 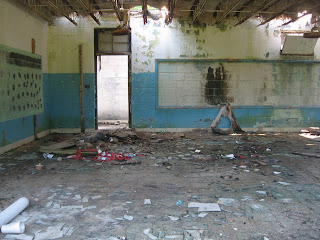 "We'd like to get that old school fixed up and renovated, like Kingsport is doing with the old Douglass School," says Mr. Lyons. "That's a big project for our community right now. We're looking for grants and funds, to renovate it as a community center for reunions, birthday parties, community events and neighborhood gatherings. Perhaps, part of it could be an historic center and museum, where we could memorialize some of the things that made New Canton a good community.. artifacts that were passed down from slavery times, that were important to our families. We're not lazy, we could do a lot of the work ourselves."

NEW CANTON RESIDENTS BILL LYONS (L) WITH OZINE BLY---WHICH ONE IS THE MAYOR? 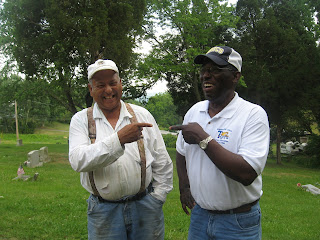 "We know nothing like this will be possible," says Mr. Lyons, "without the community's help, without help from the younger generation that we have got to work to get them more involved, and also from the Lord. Right now, nobody but the Lord knows what this community has been through since slavery times, and it's a heritage worth remembering."
Posted by douglassriverview at 1:55 AM