Sometimes when you take two steps forward, somebody shoves you back three or four.

I ran across this sign while riding around Sunday, August 10, 2008 in Eastern Hawkins County, taking pictures for the articles on the African-American heritage in that area.. a legacy we all share. 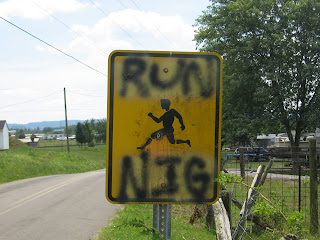 The sign has apparently been there for some time. I got out of the car and examined it closely because of the fading, and it appears to me that something had been spray-painted over it previously, and somebody scrubbed that off. The culprit apparently then came back later and sprayed-painted it again.

Although I am including the sign in a couple of articles, I feel it necessary to give it highlight this sign by itself.

Take care. There are still some people here at home right in our own backyard, who think African-Americans should be neither seen, nor heard.

---Calvin
Posted by douglassriverview at 7:59 PM