Frederick Douglass Hord was born October 3, 1893, in a log cabin in New Canton. He was the youngest of 15 children. His parents were Frederick R. and Mary E. Hord. 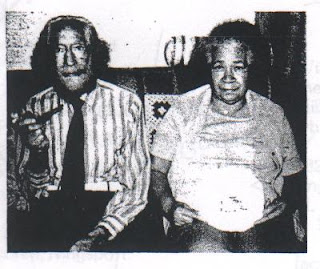 Now that "Professor" Hord has just celebrated his 83rd birthday, there's a little frosting on his beard and hair. However his enthusiam belies his years. His kind eyes speak eloquently as he does, recalling earlier years as a teacher, principal and Tennessee Eastman Company employee.

Hord is proud of his heritage; he says his ancestors have the qualities of mixed blood--Indian, White and Negro. He says "my mother's father was shite." She used to spin wood into yard and make blankets, he said. They kept about 15 sheep. When one of his sister's sheep died, she sheared it to save the wool.

In addition to his career in the teaching profession, Hord has cut timber for sawmills, split rails, worked on a farm, and on the railroad.

Mrs. Sallie M. Hord, 68 years old, retired after 26 years as a janitress at the Holston Defense Corporation and the Tennessee Eastman Company. She proudly exhibited a certificate recently acquired from the Senior Citizens, for a course in Artex painting. The life-like tiger is to be framed and used for a wall hanging.

Mrs. Hord's great grandfather was a Leeper (perhaps related to Lillian Leeper's husband), and part Indian. Her mother came from Virginia and was half-white. She was raised on a farm and enjoyed riding horses. Her parents were the late Eldridge and Etta Hoard (note the spelling).

Mr. Hord, a World War II veteran, told of the time he was in the Army. They were marching up to Metz, Germany with orders to take it at all cotss, even sacrificing 30,000 men.. then they got word the Armistice was signed!

Hord worked his way while attending Swift Memorial Junior College in Rogersville. His first salary as teacher at New Canton was $35. He served as principal from August 31, 1936 through 1940. He taught about 25 years in one and two-room schools. He still has his contract for that first year, signed by A. E. Cope.

Hord needed money for his family, and found he could make more working as a janitor at Tennessee Eastman, so the family moved to Kingsport, where the boys could attend high school.

The Hord's have four sons, all employed in New York State. Frederick D. is with Bell Aircraft.. William A. is a businessman.. bobby G. is with General Motors, having acquired his Master's at the University of Buffalo.. Hugh K. is a computer analyst in Long Island, New York. There are eight grandchildren and three great-grandchildren.

The Hords have a farm in New Canton, and at one time, had a chicken hatchery. He remembers the little post office and the Carter-Parker Store near the Hord Mill. He remmbers his father telling him that a slave (an accomplished workman) built the elegant HOrd HOuse in Church Hill, and was paid $100 "if he could complete it by Christmas," which he did. When they held Open House, he and his master had the first dance to celebrate.

Mr. Hord was named for a famous slave.. Frederick Douglass, who crossed the Mason-Dixon Line, was sent to England and made speeches against slavery, and was appointed Minister to Haiti. A postage stampwas issued in his honor, one of which Mr. Hord has for a keepsake.

The Hords are members of the Bethel A.M.E. Zion Church in Kingsport.
Posted by douglassriverview at 11:57 AM