"How nice it is to get together.. without a funeral."

That's the observation from Richard Ford, organizer of the New Canton Family Reunion, at the last gathering for the families, friends and loved ones at the Lyons Chapel A.M.E. Zion Church in New Canton. It was the regular Sunday morning church service at one of East Tennessee's oldest black churches, chartered in 1869, but around a lot longer than that. 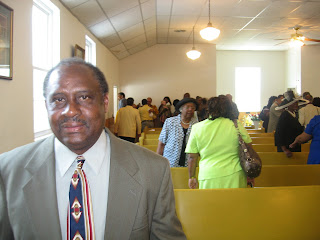 "It's important to bring everybody back home," Mr. Ford says, he himself from one of the community's oldest families. "Everybody's background is rooted in this church. Many families whose loved ones have passed on, generation after generation, came through this church at one time or another. There's hardly a black person even in Kingsport that cannot trace their family tree without coming through New Canton and this church."

"This place used to be the only place for us to come to back in the day," he remembers. "It was the center of activity for the community.. dances, socials, sporting events.. they were all centered around here, and because of that, it was always good, clean fun with a spiritual background." 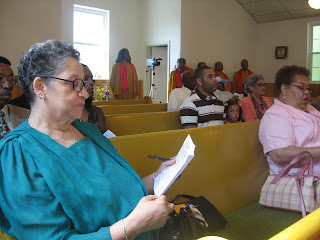 Rose Darnell of Rotherwood, still had not been back to the little community she called home for a short time. Once she found out that people she'd known and grew up with would be coming back for the Reunion, she says, she couldn't wait to get back--50 years later.

"I lived in New Canton with my cousin Margaret Ford for about a year," she remembers. "They had the store back then, when I was about 15 years old. It was such a great experience for me as I look back on it. I love seeing the people, seeing them and talking to them and remembering things we used to do when we were kids." 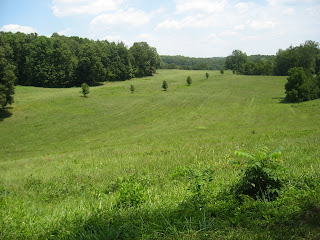 "It's interesting now," she says, "because the place where we lived, is gone now. It's just an open field. I would say to the young people coming along, to come back once in a while, more than I did. I wish I would have come back sooner. Keep in touch with their roots, because this is where their parents and grandparents came from."

"We want to relive that closeness by fixing up our old New Canton School, one of the oldest black schools in Hawkins County when it closed back in 1966," says Mr. Ford. "We'd like to have things like celebrations, banquets, weddings, community gatherings, and even sporting events in a newly renovated community center," he says. "Our church anniversary is coming up, and we wanted to have the New Canton Family Reunion and the anniversary at the same time because they go hand in hand, but the timing wasn't right." 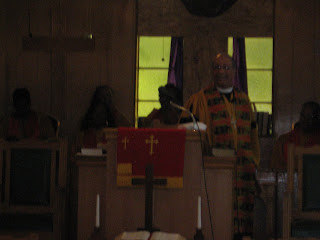 "No matter," says Lyons Chapel's minister, Reverend James A. Snapp. "We welcome everybody back home for either event, and I mean that sincerely."

The pastor meant it so sincerely, that he put aside the sermon he'd planned to preach this particular Sunday morning, and decided to speak off the cuff about "welcoming folks home who haven't been back to New Canton in years." 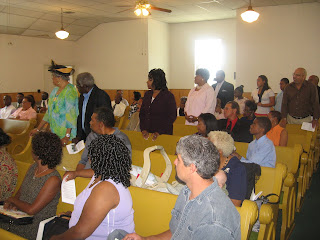 It was perfect timing.. when he asked for visitors to stand up during the morning worship service on this last day of the Family Reunion, almost half the church congregation stood up, to a chorus of "amen's" and "halleluyah's." Visitors named off states from near and far, cities that some of the older New Canton residents only knew, from hearing about them in the news.

Each visitor seemed to be no stranger to Lyons Chapel.. some spoke of their ancestors who call this, their church home for so many years. Others spoke of the devotion they had to this church and community, when they lived here, generations ago. 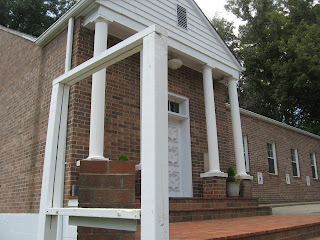 Had the many visitors stopped by Lyons Chapel a few weeks ago, they might not have known where they were, if they'd forgotten. "Back in the spring, vandals had torn up a mailbox out of the ground down the road," Reverend Snapp told the congregation, "and they threw it through our church sign." It wasn't a fancy sign, one with lights that can be seen from a far, in fact, it was just a plainly painted sign that had withstood the test of time, but not the test of a heavy object hurled through it.

Reverend Snapp spoke of it, almost with a reverance.. as if it were a friend, assaulted by lost souls who did not understand their actions. As he spoke of it, one could almost hear the Word of Jesus.. "forgive them Lord, for they know not of what they do." 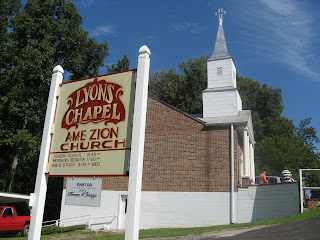 But this story has a happy ending.

"Through some dedicated church members, their prayers and hard work," he told the parishioners, "when I drove up this morning, I saw this beautiful new sign that has been put up." The pastor thanked the church members, among them Sister Irene Richmond, Brother Billy Lyons, Brother Jimmy Leeper, who worked hard to get the new sign put up.

And in a special moment, the new sign was dedicated to the church, as is customary in African-American churches, to proclaim to everybody passing by on New Canton Road, that this is a House of God. 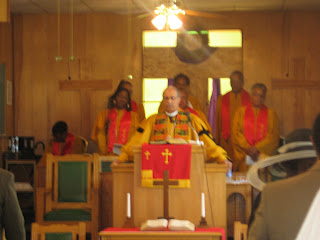 After some soul-stirring music from the Lyons Chapel church choir, Reverend Snapp told the congregation that great biblical story of the son who pestered his father for his share of the family wealth. After getting it, he left for whatever his fate had planned for him, leaving behind a grieving father to pray for his one-day safe return home. Tying that story in with the many New Canton Reunion visitors who'd also left home and returned after mahy years, the pastor spoke of the wonderous day when that wayward son came back home, to a father, awash with joy. "It's always good to come back home," he told the parishioners, "because, just like the father whose prayers had been answered, a father always loves his son, no matter how his life had turned out.. it's always O-K to come back home." 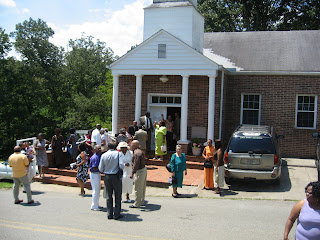 "Young people.. stay close to your roots," says Mr. Ford. "Always remember where your family came from, and above all, go as far in school as you can. That will give you purpose, and a reason to keep your heritage alive."

"And remember, just like Reverend Snapp told us today," he said..

"You can always come back home."
Posted by douglassriverview at 12:32 AM