New Orleans: "It's A Nice Place To Visit, But I Wouldn't Want To Live There"


AS HURRICANE GUSTAV LEAVES ITS MARK ON NEW ORLEANS, ONE DOUGLASS-KINGSPORT ALUMNUS REMEMBERS THE MARK HURRICANE KATRINA LEFT ON THE TOWN AND HIMSELF.... EXACTLY THREE YEARS AGO 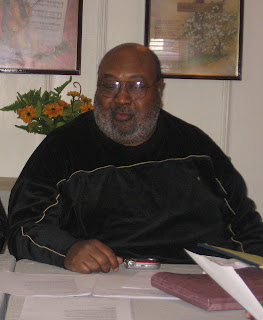 He has personal experience of living through a hurricane.

Doug, his wife Vivian, sister Tina and sister-in-law Carolyn Dulaney were in New Orleans watching, as their fun-filled vacation to the Big Easy 3 years ago, turned into America's nightmare.

"My heart really goes out to the people of New Orleans," he says, "to have to go through another hurricane aftermath, this time Gustav. I feel so sorry for them." 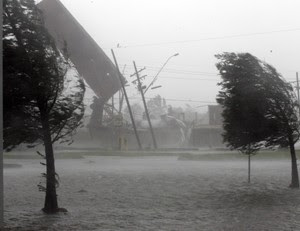 "We survived Hurricane Katrina itself," Doug remembers. "The rain and high winds were nothing, compared to what we experienced afterwards."

"On Saturday before the storm hit on Monday, we had asked the police and emergency people around our hotel before the hurricane hit, if we needed to leave," he says. "They said no. Sunday morning the day before the storm hit, we asked them again, do we need to get out of here, and again they said no, that the storm was going to pass away from them. Then on Monday morning after the storm's eye went up through Biloxi, we got winds from the outer bands of the hurricane, and one by one, the levees broke. We heard of water rushing through neighborhoods headed towards downtown, and all of of sudden, the authorities told us we had to leave. We said 'where are we supposed to go?' and a policeman said for us to go to the Convention Center. We walked over on our own. Once there, a policeman came in, took off his uniform and changed into a jogging suit. He said his police radio was dead, and he didn't know what to do."

"And then, the floodwaters came." 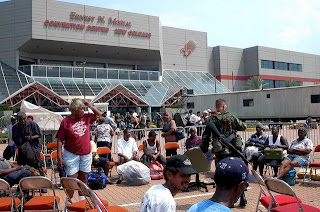 Doug and his family spent the next 4 harrowing days in the Convention Center, along with at least 3,000 evacuees with no place to go, and no way to get there.

"You wouldn't believe what we witnessed," he remembers. "From babies to grown men and women, to old people, just human suffering and crying."

Newspaper accounts of those four days, indicates that looters broke into nearby stores and shops, scavenging for food. Anything they found, they brought back to the Convention Center. That was the only food and water available. People were being brought in through the standing water to the center, built on some of New Orleans' highest ground. They had looks of terror on their faces, according to the accounts, having just seen their homes underwater. 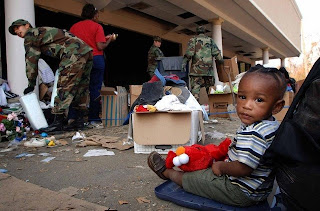 "In the Convention Center," says Doug, "we were at the mercy of the government. Everybody got disenfranchised and dissatisfied with the government authorities. For those four days, we had no communication, no privacy, no help, and much of the time, no food or water. It was absolutely terrible."

"WELL THE HIVES ARE GONE,
I'VE LOST MY BEES.
THE CHICKENS ARE SLEEPIN',
COW'S IN WATER UP PAST HER KNEES...
THREE FEET HIGH AND RISIN'."

Eventually, the heat and the stress took its toll. At least four people died at the Convention Center, their bodies unceremoniously covered with blankets, haphazardly on the concrete, even one person who passed away in a lawnchair. Forgotten people, just like everybody else in the Convention Center. 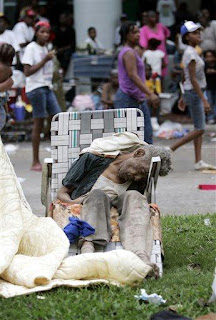 It seems.. nobody knew anyone was in the Convention Center.

At that point, came the separation of families and friends.


"HEY, COME LOOK THROUGH THE WINDOW PANE,
THE BUS IS COMIN', GONNA TAKE US TO THE TRAIN.
LOOKS LIKE WE'LL BE BLESSED WITH A LITTLE MORE RAIN.
FOUR FEET HIGH AND RISIN'." 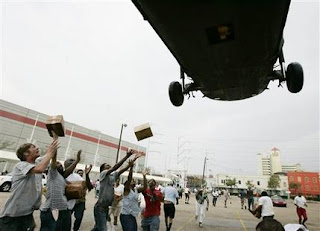 "We all went to different places," Doug remembers. "I got a ride in an ambulance that had room for one more person, and I ended up at Baton Rouge in a makeshift shelter on the campus at LSU. My wife Vivian was picked up in an Army helicopter and flown to Austin, Texas. My sister Tina and sister-in-law Carolyn were both flown to Lafayette, Louisiana. We all spent the night away from each other. When they bought in the buses to take everybody away from the Convention Center, they didn't care whether you had family with you or not. If the bus seats 50 people, 50 people got on it, related or not. Families would just have to break up, and they shut the bus door. Authorities didn't handle that part of the evacuation very well, either."

Doug and his family were all reunited the next day in Kingsport after being separated at the Convention Center. "We had to spend our own money to fly back home," he remembers. "Nobody gave us vouches like other people got, but we all got back home safely, and that was good." "What made me so mad," Doug says, "was, the United States is always so quick to go to other countries and give them help and supplies within 24 to 48 hours after a disaster, and there we were, stuck in New Orleans for four days, trying to get help, right here in the Unites States. Here we are, Americans, and cannot get any help. But you let something happen in some foreign country, and we got airplanes and ships with relief supplies, bringing recovery efforts. All of that, to people in another country."

"I think (New Orleans Mayor Ray) Nagin and the governor did the right thing this time, and made it a mandatory evacuation early on," says Doug. "Instead of sitting around and waiting on the storm to pass, they ordered everybody out long before it got there. The people may be upset, but I think it was the best thing for them, given what happened to us. It may be a hardship on residents, but I think they're gonna appreciate it later on." 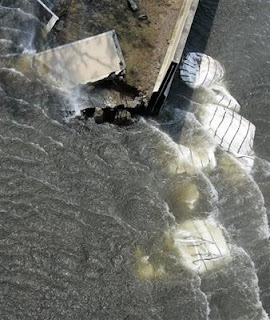 "The best thing the government could have done in the past three years, would have been to get all those levees secure," Doug says. "From what I've seen and heard, the authorities made sure all that reconstruction started, but they've not spent all the money they should have, on making sure all the levees hold, especially the ones on the west side of town. They also should pay more attention to the basic needs of the people. Sure, Harrah's Casino is a good tourist attraction, but spend money to fix the levees, not to get Harrah's back up and running."

"My heart really goes out to the people," says Doug. "We've been there with them through it, and seen the looks of anguish on their faces. Some of the evacuees are in Kingsport right now at the Civic Auditorium and at a local church. It's traumatic being uprooted from your home and taken away to a faraway place. It's just heartbreaking to see their homes underwater, up to the rooftops." 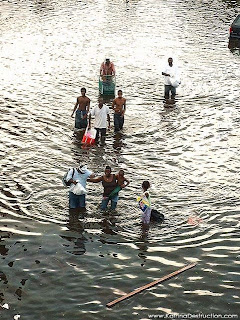 "My wife and I are going back to New Orleans in a few weeks," Doug says, "to see what we can do to help the people down there. We've been through the best of times and the worst of times with them, and we know what it's going to be like, trying to get settled and re-settled. The Red Cross is already asking for volunteers to go down there, but we're going back on our own, to see what we need to do to help. We feel we owe that to them." 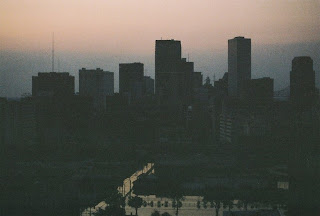 On New Orleans itself.. "It's a nice place to visit, but I wouldn't want to live there. There's just too much uncertainty as to when the next hurricane will hit. We'll even go back for vacation, but never again during Hurricane Season."


"WELL THE RAILS ARE WASHED OUT NORTH OF TOWN,
WE GOTTA HEAD FOR HIGHER GROUND.
WE CAN'T COME BACK 'TIL THE WATER COMES DOWN,
FIVE FEET HIGH AND RISIN'."
Posted by douglassriverview at 9:46 PM