The first Douglass School Book Fair of its type was, by all accounts, a rousing success.

Even though the fair was held in the spacious V.O. Dobbins Community Center Gym, table after table of books had standing-room only status, as book lovers and former students and their families looked through stacks of books.

MORE PICTURES OF THE SCHOOL BOOK FAIR IN THE PHOTO GALLERY 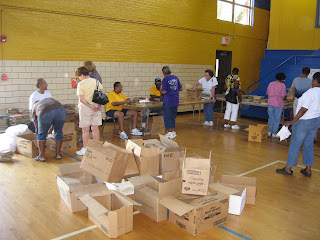 After all, the low, low price of only $1.00 per book was enough to peak everybody's interest.

Those books were rescued from a "date with the dumpster" back in the spring, when they were discovered in the school lockers of the Douglass School Building's second floor. They'd been sitting there collecting dust for the past 42 years, after the Douglass School closed its doors.

"We actually had people standing outside, waiting for us to open the doors," says Douglass Alumni vice president Andra Watterson. "We were pleassntly surprised at the response. We were still cataloging them while people were looking through them, deciding which ones they want. Fortunately, they did help us though, understanding that the former students whose names were inscribed in many of them, got first dibs on them. Many former students stopped by to pick up their old school books, and there were plenty of unsigned books to interest everybody else." 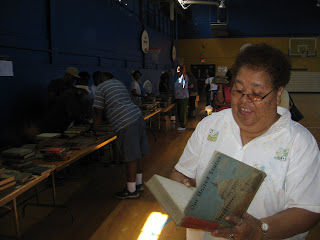 "We sold over a hundred books," says Andra, "which made money for the Douglass Alumni Scholarship program and for our youth programs. We've never done a book fair before, and the uniqueness of these books, brought everybody out in droves."

Best sellers among the many books were arithmetic, basic math, English and French books, and the history books, especially the ones talking about countries that were no longer in existance. Home Economics books also proved very popular, because many of them had recipes in them and kitchen-how-to suggestions, including how to weigh and measure food. Those ideas have not changed in generations. 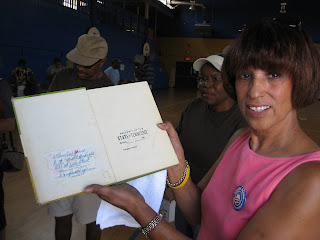 Kathy Evans made an important find.. she located two more school books inscribed by her brother Ricky, who had passed away. She also located a school book belonging to her other brother Carl, who also passed away just recently.

"Since the names of former students and their books were published on the Douglass website," says Andra, "we were able to make reservations and hold books out for those students whose names were in them. Between now and our next school book fair, we'll be gathering up even more names, and letting people know which of their school books we have, so they can reserve those, too, if they want." 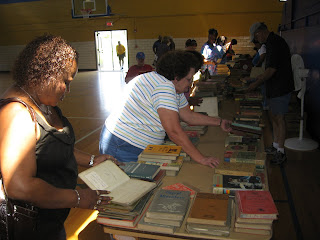 A couple of teachers were also seen perusing the school books.. One of them mentioned that she had taught with one book she found, and lost track of it. Most of the books the Douglass School received from the school system, were hand-me-downs from Dobyns-Bennett and the other city schools--very seldom did students at Douglass get new books. Another teacher was matched up with a book that she remembered on U.S. social studies, and was overjoyed to find it again.

The biggest question at the Douglass School Book Fair?

"When is your next book fair?" 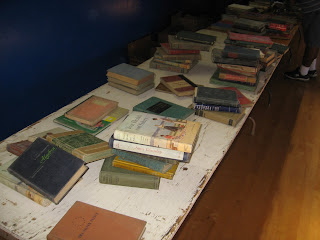 The answer is.. quite soon. The next Douglass School Book Fair will be even bigger, because other books that did not make it into this first fair, will be up for sale, along with others newly found, with the names of former students in them. Those will be cataloged, and their names announced on the website with the type of book inscribed just prior to the book sale time and location.
Posted by douglassriverview at 12:08 AM