In 1914, Kingsport Waterworks Corp., purchased 1,300 acres atop Bays Mountain Holston River Mountain to build a dam to create an impounded water supply for the of Kingsport. As the city grew, the reservoir failed to meet the needs of the expanding population. The use of the lake at Bays Mountain as a water supply was discontinued in . In 1965, a committee was appointed to study the feasibility of making the watershed area a city park. Today, Bays Mountain is a 3,500-acre nature preserve. But long before there was a lake and a park, as far back as 1750, Bays Mountain was home to settlers who built homes, farmed the land and raised their families.

Before it was a city park, Bays Mountain was home to several families

First in a two-part series

Jerome Pierce was born between 1848 and 1850 and raised in a one-room, dirt floor log cabin in Kingsport. Named Pierce after the family for whom his mother was a slave, Jerome ran away to serve the Union Army during the Civil War.
In 1865, at war’s end, Jerome returned to Kingsport. He purchased 73 acres on the side of Bays Mountain and built a log home, which still stands today. There, Jerome and his wife, Alice Luvenia Brown Pierce, raised one daughter, Virginia Pierce Bond, and four sons, Samuel Patton, Edward, Albert and M a t t h e w.
A little more than 28 acres of Jerome’s property was sold to Bays Mountain in April 2006, but the original homestead remains in the Pierce family and has been rented out for more than 40 years.
According to grandson Jack Pierce, Jerome’s property had a barn, grape vines, chicken and hogs. The original rock chimney — made of clay, mud and hog hair mixed together — still stands, and the original wood siding remains. The downstairs incudes a living room, kitchen and bedroom, with two rooms upstairs.

According to written histories, Jerome was a logger, and his skill with horses and mules became renown. He and two of his sons helped construct the dam atop Bays Mountain, hauling the stone and concrete using large Belgium horses. Jerome and son Albert also hauled rock, sand and cement for the construction of First Baptist Church on Church Circle in downtown Kingsport.
During the early years of Eastman Chemical Co., logging took place on and around Bays Mountain for the purpose of producing wood alcohol. Jerome and his sons hauled logs for the company on a Studebaker wagon.
Virginia Pierce Bond and her husband Alfred Bond raised 12 children on the rocky, wooded side of Bays Mountain. The Bonds built two homes there, both located along a trail above the present-day Sullivan Baptist Association Retreat Center.
Their first home was a one-room log cabin built around 1905 or 1906. Their second, a two-room frame house, was built around 1936.
The ninth oldest of the 12 children, Orvel Depew Bond, recently revisited his homeplaces. “Lord God, I remember living here,” he said as he surveyed what was left of his two homes. “Right here’s where I played at. Grandfather’s house was over the hill.”
Not much remains of either house today. A few logs can be found in the overgrowth. Orvel and his cousin Jack Pierce said that both homes, already in decay, were burned down by hunters years ago.
The frame home, Orvel recalled, was built by his brother Oscar and had one room upstairs and one room downstairs.
“The boys slept upstairs, the girls [and their parents] slept downstairs,” he said. Straw from a farmer was used to make mattresses, and new mattresses were made every year.
By the time the second home was constructed, some of Orvel’s siblings had moved out on their own.
What remains of the family’s well is still there, as is a concrete wall of their dairy, maintained separately from the house and cooled by creek water. Before the well was built, the family used a spring as their water supply. More often than not, it was Orvel’s job to haul either a five- or 10-gallon bucket farther up the trail to fetch the water. When the spring was being built, Orvel carved his name in the wet concrete. 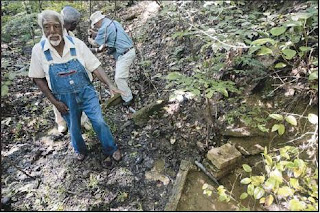 When Orvel was 10 or 12 years old, he said, Paddlefoot Shipley dug the family’s well. “You used a pulley system with a rope to get the water. You didn’t have to pull it up by hand,” he said. “And if you let the bucket loose from the rope, you had to go get grandpa to get it out.”
Orvel’s father was a sharecropper who kept a third of what he raised.
“Our major food was probably beans and cornbread,” Orvel said. “That was about everyday food. In the fall, had hog meat. We didn’t have no beef back then.”
One Sunday a month, the preacher came from Jonesborough for the weekend, staying in the Bond cabin, Orvel said. One particularly Sunday sticks out in Orvel’s mind.
“My mother, she was expected to feed him over the weekend,” he said. Chicken from a nearby field were caught, killed and cleaned for the meal.
“She had this chicken on the back end of the stove ... in a pan of grease on the stove she’s frying chicken,” Orvel recalled. “Close to time to eat, before you’re going to eat you have to go up here in this holler and get some water for them to drink. So my mother called me in to go to the spring and get the water. Back then children ate after the compan y.
“When I went to get a bucket to get the water, I got me a piece of chicken to put in my pocket. She’d just took the chicken outta that grease and it was burning me to death, but I couldn’t take it outta my pocket ‘cause if I did, she’d come give me an awful whoopin.”
It wasn’t only the Bond children who visited the spring. 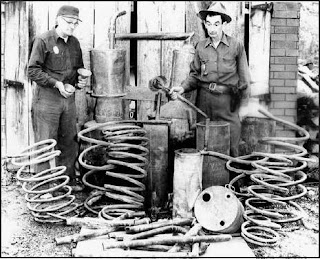 “I’m not saying they were moonshiners,” Orvel said. “They came and got water out of this spring.” But one man was determined to put the moonshiners out of business. “ [Jasper] Jap Crawford [a constable or perhaps sheriff], every once in a while he’d come out carrying a still on his back,” Orvel said. Orvel also remembers dragging wood out of the hills to warm the Bond home. “Winters were cold,” he said. “Some were rough.”
The youngster had his own novel way of keeping warm.
“I used to sit at the chimney,” he said. “The only warm place in this holler was outside the chimney during the winter.”
Orvel left his home on the mountain in 1943.
“My mother was still here. This was in ’43. When I left here I went to Uncle Sam. Twenty-one years,” he said. 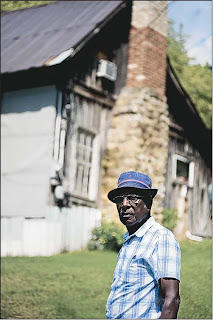 Although Jack Pierce — son of Albert Pierce and Lena Fitzgerald Pierce — was raised in what was known as Old Kingsport, around the Netherland Inn area, he visited his Bond cousins on the mountain on occasional Sundays.
“I remember plenty of good food. All day Sunday we’d make a day of it,” he said.
In town, Jack’s father was a blacksmith who shoed horses for Pet Dairy.
Samuel Patton Pierce, another of Jerome’s sons, built his home on the site of the Sullivan Baptist Association Retreat Center. Along another path leading away from the center is the remains of the Samuel Patton Brown homestead.
Samuel Patton wasn’t married when he built his home, and it’s speculated that he built there to be near his sister, Alice Luvenia Brown Pierce, Jerome’s first wife.
Not much is known about Samuel Patton’s early years. He lived in the small one-room cabin prior to his marriage to Mamie Rutledge.
“As far as anyone knows, he built the cabin himself,” said his son, Montreal “Bounce” Brown.
The couple moved to Jonesborough where Samuel raised and traded horses, and where Bounce was born two months after his father’s death in July 1929.
As with the Bond cabins, not much remains of the Brown homeplace save for a few foundation rocks and logs.
“It’s hearsay, but they say the cabin was still here around 30 or 40 years ago, but the roof had caved in. The walls were still standing,” said Paul Strong, who with his wife serves as caretaker of the retreat center. 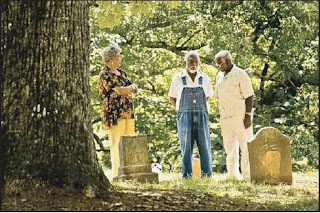 Jerome Pierce died in 1945 and is buried, along with Alice Luvenia and other family members, in the Pierce Chapel A.M.E. Church Cemetery, listed on the National Register of Historic Places in 2000.


Next week: Whether Jeremiah Simpson was shanghaied from Germany or peeled potatoes to pay his passage from Ireland to the United States may never be known. What is known is that in 1848, he got a land grant for 367 acres in Hawkins County, very near present-day Bays Mountain Park.
Posted by douglassriverview at 10:53 PM