A Black Man and the Confederate Flag: A Study of Contrasts

"The South will rise again!"

"The government is out of control!"

"The Civil War was not about slavery!"

Those modern-day chants are not coming from the Sons of the Confederacy, or the beer-drinker at the local redneck bar, or even the community loudmouth hiding behind a white sheet with two holes poked in it. 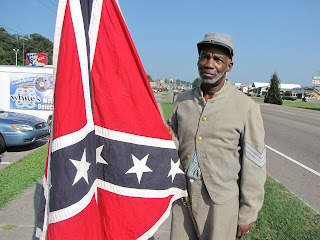 They're coming from H.K. Edgerton of Asheville, North Carolina.  He's now a  political activist and self-proclaimed preserver of Southern heritage.

He is also African-American.

"The northern folks used black folks against the southern white folks in the southern United States to perpetuate the institution of slavery," Edgerton told your Douglass Website recently, one Saturday morning in Pigeon Forge, Tennessee. We found the national political figure and former NAACP local Asheville president, waving the rebel flag outside a Sons of Confederate Veterans rally where he had a speaking engagement, on the Parkway in Pigeon Forge, Tennessee a few weeks ago. 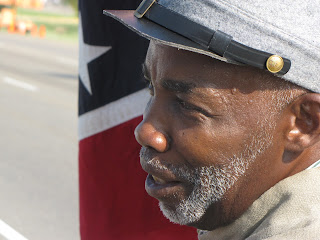 "There were a lot of things going on in the body politic back then that people don't want to talk about," Edgerton says, "and they (northerners) always try to find the bad things and the hate, but there were a lot of good things goin' on around here in the southland of America, and I'm not here defending the economic institution of slavery. God, in his infinite wisdom allows something to happen that brought sincere, honorable people in here and mixed in those folks wit the Christian Bible and the Christian thinking that those folks had, and some things happened. Some things that only God Himself can explain."

Edgerton says, one of those things was what he calls, "a love between a man called SLAVE and a man called MASTER." It is that ideology that sets him apart from most African-Americans.. and sets them at his throat. "When you see the rebel flag," says Edgerton, "black folk have a tendency to think about slavery, than they do when they see the Stars and Stripes flying. The Stars and Stripes has more guilt hanging on its raggedy drawers than anything we talk about the Christian Cross of St. Andrews here," referring to the rebel flag he's waving. "This is an honorable extention, this is a Christian symbol, and has been used across the world. Other people in the world understand the symbolic meaning of this flag, and what these (black) folks have done is, they certainly think about slavery because my northern protagonists laid the economic institution of slavery, which is a lie. There were a lot of things on the table at the time of the Civil War.. slavery was a key issue, but it had nothing to do with the economic institution itself. The Civil War was about what property was." 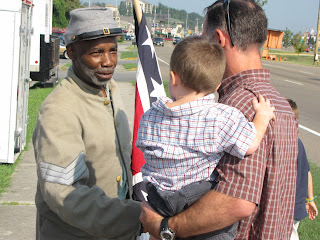 As you can imagine, Edgerton's comments stir up controversy in the African-American community, and nothing but praise and admiration from members of the southern heritage groups who wave the rebel flag. Even as we interviewed him, folks attending the Sons of Confederate Veterans event in Pigeon Forge, were not afraid to approach him, have pictures made with him, and ask questions in support of his views.

Edgerton has been quite out-spoken in those views, but he directs much of the media coverage of his opinion at CNN. 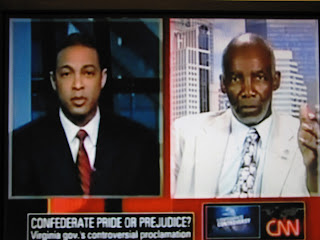 "Now there are some black folks," he began, "I gave an interview to CNN to a young black man by the name of Don Lemon, who refused to allow me to talk. Every time I began, he'd ask me a question. I began to answer that question, and he'd just cut me off. The problem with the whole thing was.. they thought i would just appear on their terms, just an old field n-r running around over there, scatching his head with some white folks. Far from the truth."

For the record, click here to see the actual CNN interview that Don Lemon did with Mr. Edgerton back on June 9th, 2010.  The video is a YouTube clip. 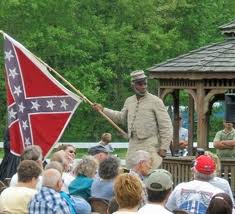 For the most part, Edgerton travels back and forth across the country, mostly in the southern United States, what he refers to as the "southland of America." Wherever he goes, his appearance and his views spark considerable conversation, depending upon who is listening.

"I spoke at Sycamore Shoals (in Elizabethton, Tennessee) recently," he says, "and a young black man in the audience approached me. His name was Darnell, can't remember his last name. I began to tell him some of the things I'm telling you right now, how black folks made the implements of war, provided the food stuffs for General (Robert E.) Lee's beleaguered army, went off to war and may have taken up arms. They built bridges, stayed at home, protected those plantations, all kinds of things black folks were doing around here. I began to tell him about General Nathan Beford Forrest, because all this stuff came up that Nathan Bedford Forrest started the Ku Klux Klan.. he did not do that. Some men from Pulaski, Tennessee did that." 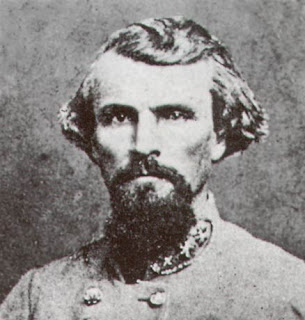 For the record, Edgerton is correct on this account. Click here to read the Wikipedia article on Nathan Bedford Forrest, which indicates he was indeed the first Grand Wizard of the Klan, but provides no evidence that he was neither the founder, nor one of the Klan's original founding members.

"Matter of fact," Edgerton says, "General Lee was asked if he would head up the Klan, and he said 'I don't have time, get General Forest to do it.'

Edgerton is clear in his insistence that the troubles of southern America were born on the backs of northern "Yankees," who brought those problems with them during the Civil War, "because here in the southland of America, you've got the Union league running around here, terrorizing black folk and white folk, whipping black folk, making 'em vote in the Republican party, all kinds of things going on around here. It was chaos. The Ku Klux Klan was trying to bring some law and order around the southland.. these folks (northerners) were just terrorizing us." 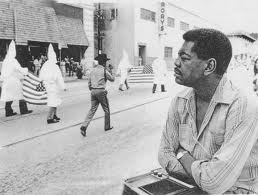 For the record, Edgerton does not appear to be correct on this account. Click here to read the Wikipedia article on the Ku Klux Klan, which indicates the Klan's only original intention was to intimidate and terrorize persons of color after the Civil War.

We asked Edgerton what he would tell African-Americans who might not understand and don't agree with his views on the rebel flag and southern heritage. 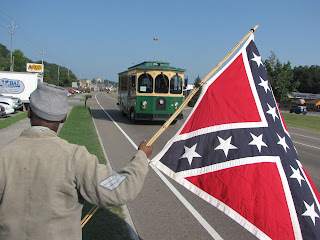 "You cannot separate any of this," Edgerton told us, referring to the rebel flag he waved to the Smoky Mountain tourists along the Parkway in Pigeon Forge. "You can't blame this on anything. Look at the 13th amendment.. basically it says that if the white man in the south would agree to Mr. Lincoln's tax increases, then Congress would never have the ability to write an amendment to end the economic institution of slavery. The white folks in the south said, 'we are not going to do that to our black folk.. emancipation is already coming to the south. The whole world participated in the slave trade, so don't lay that on the white folks in the south."

"Black folk need to dig into their own backgrounds, their own heritages and see where they came from."


Hear part of the interview your Douglass Website did with H. K. Edgerton on Saturday, August 28, 2010 on the Parkway in Pigeon Forge, Tennessee.  Just click the "PLAY" button. 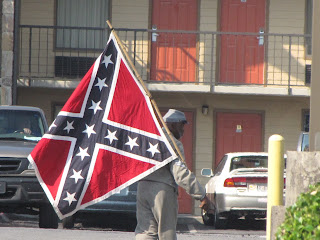 "Digging into our own backgrounds.. perhaps, discovering what we have to be proud of in our own ancestries."

That may the ultimate meaning behind H.K. Edgerton's views on southern heritage.. that African-Americans need to research their own backgrounds, and make value judgments based on their OWN ancestral experiences. Apparently, Edgerton has researched his own background, and reached conclusions that he feels that he should share, through the rebel flag and his views.

YOUR heritage.. may be quite different from his.

How will you celebrate that heritage?

Posted by douglassriverview at 8:21 PM