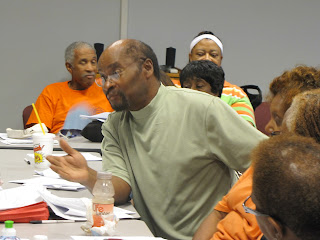 DON HICKMAN AT A DOUGLASS ALUMNI BOARD MEETING

Since 1961, the Maryville College Alumni Citation has been awarded to former students who have, according to the guidelines, “rendered such service in professional, business, civic, social or religious endeavor as to benefit humankind and bring honor to the college, or who have rendered unusual service in any capacity on behalf of the college.”

A 1970 graduate of Milligan College, Hickman spent 30 years in federal government service. The first African-American graduate of Dobyns-Bennett High School, he came to Maryville College in 1966.

He was involved in the All-College Council, the University Christian Movement, the Circle K Club and the Black Interest Group, and was a campus leader.

Hickman was also an All-American football player and valued member of the basketball, and track and field teams.

He majored in sociology and, following graduation, was hired by the Oak Ridge City School System as a social studies teacher, head track coach and assistant football coach.

During his four-year tenure at Oak Ridge, his job was interrupted by service as a commissioned officer in the U.S. Army.

In 1978, Hickman joined the Federal Bureau of Investigation (FBI) and for eight years, worked as a special agent in Jackson, Miss., and Washington, D.C., investigating public corruption and governmental fraud.

In 1981, the FBI recognized Hickman with the Distinguished Service Award and, in 1986, Hickman received the U.S. Department of Justice’s Meritorious Achievement Award.

Hickman held that position until his retirement 10 years later — with the exception of serving as acting inspector general from November 2002 until May 2003.

An effective leader who oversaw audits and investigations and led efforts to prevent and detect fraud, waste and abuse in agency programs, Hickman received two awards by the Executive Council on Integrity and Efficiency.

In 2000, he received the council’s Award of Excellence; in 2004, Hickman was presented the Council’s Individual Accomplishment Award.

Since his retirement, Hickman has become an author. “Truth Matters,” a murder mystery inspired by real-life FBI cases, was published in 2008.

Hickman, a longtime supporter of Maryville College, has served on boards, task forces and committees at his alma mater.

He is past president of the Alumni Association, and is completing a term on the college’s

Hickman is a member of the College’s President’s Circle and the Calvin Duncan Society.

He is married to Alcoa native Janet Houston Hickman, the general manager of Continental Express Airlines in Knoxville. They have two adult children and three grandchildren.

Hickman, a 1966 graduate of Dobyns-Bennett High School, is the son of Mr. and Mrs. William Hickman of Kingsport.