"Kings of the Hill" 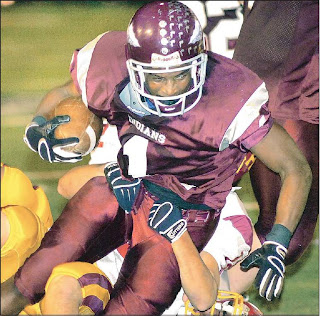 KINGSPORT — Sooner or later Science Hill may grow accustomed to losing football games to Dobyns-Bennett. D-B (9-0, 6-0) defeated the Hilltoppers Friday night 49-6 to win the Big 8 Conference championship and clinch a berth in the TSSAA’s 6A playoffs. It marked the Indians’ 17th consecutive victory over Science Hill (5-4, 2-4) and came on senior night. Quarterback Sean Seabolt and halfback Devaun Swafford kept the chains moving constantly with big gains, and fullback Chris Sensabaugh reached a milestone. Seabolt accounted for 310 yards. He rushed eight times for 143 yards and scored a pair of touchdowns on runs of 44 and 21 yards. Seabolt also completed 3 of 4 passes for 167 yards and two TDs.
“We came out fast just like we did against Tennessee High and David Crockett,’’ Seabolt said. “Come playoff time, we’ll not be able to start slowly. We’ve got to get on top of people.’’ 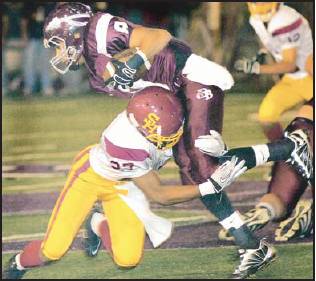 Swafford, who became nauseated before the game, scored three touchdowns — on runs of 36 and 7 yards and a pass reception covering 47 yards.
“We entered the game thinking it would be a hard-fought one,’’ Swafford said. “Nobody expected us to win by this much.’’
Sensabaugh picked up 45 yards on eight carries to surpass the 4,000-yard plateau in his 3½-year stint as a varsity starter. He is by far D-B’s modern-day rushing leader with 4,008 yards.
“It’s a good feeling to know I’ve gained that much yardage,’’ Sensabaugh said. “It’s something for me to remember, but what I really want is a state championship.’’ D-B got two quick TDs on Swafford’s 36-yard dash and 47-yard pass catch for a 14-0 lead. Science Hill bounced back with a 10-yard TD pass from Justin Snyder to Gannon Glaspie. D-B’s Derrick Steele, who had two catches covering 119 yards, blocked the extra point kick.  From that point, it was all D-B. The Indians reeled off three more scores in the second quarter for a 35-6 halftime lead. 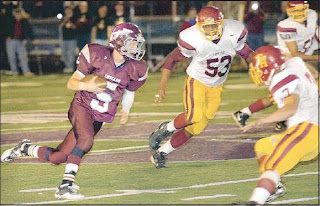 Dobyns-Bennett quarterback Sean Seabolt (5) cuts back toward a hole in the Science Hill defense on his way to a touchdown Friday night in Kingsport.

“Seabolt made good throws and Steele had two outstanding catches,’’ D-B coach Graham Clark said. “It’s hard for an opponent to key on just one thing in this offense. Our defense played extremely well, giving up only one TD on a short field.’’
When D-B got its first two TDs, Science Hill’s defenders were crowding the line of scrimmage. Swafford went to the left on an option play and cut back near the goal line for his 36-yard score. “I got out in space and Maurice Cannon threw a perfect block,’’ Swafford said.   Five minutes later, Swafford hauled in the 47-yard pass from Seabolt to make it 14-0.
“It was a straight fly pattern,’’ Swafford said. “I saw that no one was back there and just took off. We sent both slotbacks downfield.’’  Clark gambled early in the second quarter after Science Hill had closed the margin to eight points. He had Seabolt throw from the D-B 13-yard line. Seabolt hit Steele on the run and he beat a lone defender to the end zone.  “I ran a post route,’’ Steele said. “We faked a run and I was able to get behind No. 12 (Glaspie) and Sean threw a great ball. He almost got a hand on it.’’

Before halftime, Seabolt romped 44 yards for a TD and Swafford scored again on a 7-yard run.
Seabolt got another TD in the third quarter on his 21-yard run. The final D-B score came with reserves on the field — Chris Cook pitched a 20-yard scoring pass to Jackson Crum.

“We executed,’’ said Ty Hayworth, D-B’s mammoth lineman. “When we do that, things usually come together.’’ Science Hill seemed doomed from the start. D-B outgained the Hilltoppers 316-73 in the first half.  “When you come here, you can’t give up big plays early in the game,’’ Science Hill coach Stacy Carter said. “D-B has a great team. Seabolt is a heck of a player. He’s probably as good a free safety as he is a quarterback.’’

Outside linebacker Will Allen spearheaded D-B’s defensive charge.   “Science Hill is our biggest rival and we knew we’d have to pick up our game,’’ he said. “We’re communicating well on defense. I didn’t expect this kind of score but I’m happy with it.’’
Posted by douglassriverview at 1:31 PM