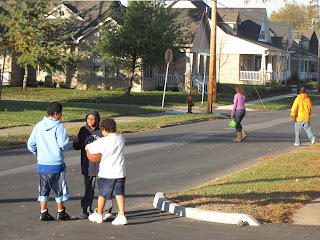 Remember when neighbors sat on their front porches, conversing with each other and waving to folks passing by? Remember when the kids were playing and riding their bicycles in the streets going from house to house without a care in the world? Remember when your child was under the watchful eye of a friend or neighbor down the street, and you didn't have to worry about their well-being because your neighbors had your back?

That time returned to Riverview this weekend.

One of the most popular kids' nights of the year, turned out to usher in Riverview's unofficial return from the drug dealing on every corner, and random shootings, fights and shouting.

The Riverview community was abuzz with Halloween activity on Saturday, concentrated in the center of the neighborhood in the parking lot at V.O. Dobbins, and in the parking lot at Central Baptist Church and in its Fellowship Hall.  The improvements at Dobbins, and the new HOPE VI homes where people were still moving in even on Saturday, served as a family-friendly backdrop. 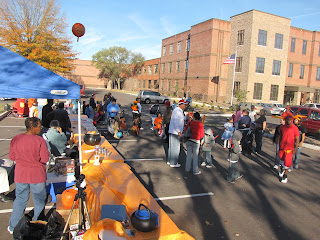 The Halloween “Boo” Party was held Saturday from 4 to 7 p.m, in the parking lot at V.O. Dobbins, because the ballfield is under cultivation while grass is being grown back from 3 years of construction.

There were costume contests for various age groups, face painting, balloon sculpting, and goodie bags for all the kids. 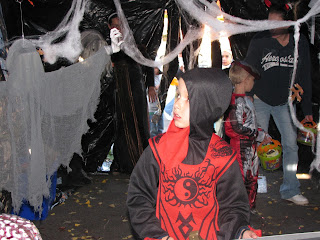 Click here to see a slide show of the 2010 Halloween "Boo" event at the V.O. Dobbins Sr. Complex

Among all the fun things for the trick-or-treaters, was the "Haunted House," set up and run by the New Vision Youth kids.  Willie Hodges, Jack Pierce and Orvill Bond, along with Johnnie Mae Swagerty and her helpers did what they could, but a high wind played havoc with the "house" most of the afternoon, which, if you were inside the "house," felt like any minute, left an eerie feeling along with the Halloween ghost and goblin atmosphere.

Several of the kids absolutely refused to set one foot inside the "house," but for the ones who braved the visit, they were in for a scary treat.  Ghosts, dead people, and scary Hallowee items greeted them at every turn. 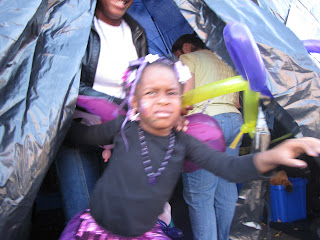 As you can see.. sometimes, the kids were running out of the "house" so fast, they were just blurs.
It was truly a sight to see the kids once they got a taste of the hoops and hollers surrounding the scary Halloween sounds, courtesy of a nearby CD.  Those scared kids tore away from their mothers' grasps and made a beeline straight out the haunted house door them came in, despite momma's attempts to grab them.  Some of them, the ones who didn't want to go inside in the first place, followed true to form.  The tears of fears only stopped once they were outside.

That's when they realized it was all in fun.  But by that time, there was the face-painting, the Capri-Sun drinks, the candy bags to capture their attention.  Chocolate proved to be a very good pacifier. 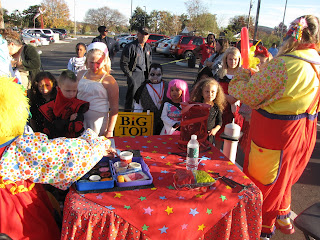 The Halloween "Boo" event was sponsored by Kingsport’s Parks and Recreation Community Services, South Central Kingsport, the Weed and Seed program and New Vision Youth.
Posted by douglassriverview at 11:12 PM