KINGSPORT — Dobyns-Bennett, the state’s No. 3-ranked 6A high school football team, looked the part Friday night — maybe even better.
The Indians (7-0, 4-0 Big 8 Conference) exploded for a 41-0 halftime lead and essentially turned over the game to reserves against Tennessee High (5-2, 3-1), the state’s No. 8-ranked 5A team. 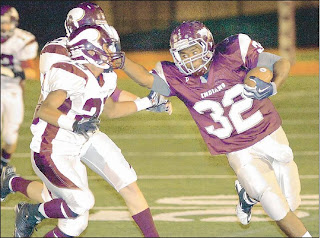 D-B won 41-14 before a crowd of some 8,000 at J. Fred Johnson Stadium. Such a wide margin was hardly expected with two teams playing to break a tie for first place in the conference.
Fleet-footed senior quarterback Sean Seabolt was man of the hour for D-B. He kept the ball eight times for 158 yards and scored four touchdowns. His TD runs of 34, 26, 53 and 14 yards on option plays put the Vikings in a state of shock.
So dominant were the Indians that they had a total offense of 408 yards — 393 of it by rushing — com- pared to Tennessee High’s 17 at halftime. In this 24-minute span, the Vikings were held to just 1 net yard rushing by the belligerent D-B defense. The first down count at that juncture was 15-2.
The Tribe seemingly could do no wrong. With 7:58 showing on the clock in the second quarter, D-B had already mounted a 35-0 lead.
“It happened a whole lot quicker than I thought it would,’’ D-B coach Graham Clark said. “I’d thought Tennessee was more physical on defense than it appeared tonight.
“All of our backs ran hard. We had very good defensive play. I’m real proud of the team’s effort.’’
The offensive line blocked with precision. Tackles Taylor Hyleman and Cory Hall, guards Brenton Leeper and Ty Hayworth and center Michael Meece rocked the Viking defenders back on their heels.
“This is such a good group of guys who show up for practice with their hard hats on,’’ offensive line coach Joey Christian said. “We work a lot on trying to create seams and when we do, good things usually happen with these running backs. I was pleasantly surprised by the results tonight.’’
With the linemen holding their blocks, Seabolt repeatedly faked to Chris Sensabaugh in the middle and broke outside. With halfbacks Maurice Cannon and Devaun Swafford trailing for option pitches, Seabolt elected to keep the ball instead, and the move completely threw the Vikings off guard.
“We knew we couldn’t afford to come out as slowly as we did against South and expect to win,’’ the 160-pound Seabolt said. “We had to jump on Tennessee High early. We got embarrassed in Bristol last year and this was a revenge game. Our offensive line is so strong, I’ve been sacked only once this y e a r. ’’
Hayworth and Hall have been pillars of strength in the forward wall that protects Seabolt.
“Coach Clark told us we had to redeem ourselves for losing the way we did last year,’’ Hall said. “Tennessee High whipped us up and down the field. Offense starts and ends with a team’s line play.’’
The 300-pound Hayworth felt this was by far D-B’s best performance of the season.
“It’s that time of year,’’ he said. “Everything is coming tog e t h e r. ’’
Sensabaugh ran the ball 10 times for 118 yards and Swafford added 79 on seven carries.
“The line is giving us time to operate,’’ Sensabaugh said. “Everything is clicking.’’
Linebackers Rusty Clark, Robb Cross and Will Allen led the assault on Tennessee High quarterback Austin Snyder and running backs Carlos Howard, Austin Rowell and Michael Fersner. Howard managed 44 yards on 10 carries, and that was about it for the Vi k i n g s .
“Everybody on defense had to contribute for us to accomplish this,’’ the younger Clark said. “Coach (Darrell) Watson had a great game plan.’’
The Vikings’ hopes of landing a playoff berth faded somewhat.
“We couldn’t handle D-B’s speed,’’ Tennessee High coach Greg Stubbs said. “(The Indians) played faster than we did. They’re a good team. We didn’t tackle or block well. Football is about reacting and we didn’t play was well as we could have.
“We’re struggling. We’ve got some things to take care of with a couple of tough opponents — South and Daniel Boone — coming up.’’
Posted by douglassriverview at 10:13 AM