THIS STORY COURTESY THE KINGSPORT TIMES-NEWS
By PAT KENNEY
pkenney@timesnews.net 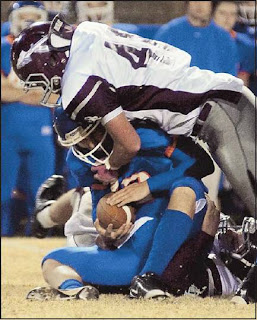 CHURCH HILL — With a smothering defense and an opportunistic offense, Dobyns-Bennett put an exclamation point on a perfect regular season Friday night with an impressive 42-0 Big 8 Conference road win at Volunteer.
The Indians (10-0, 7-0) will open the TSSAA 6A playoffs next Friday at J. Fred Johnson Stadium against an opponent to be named today.

It had been 16 years since D-B played at Volunteer. On Friday the Indians made the most of their trip to Church Hill. 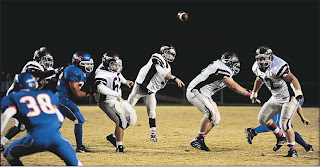 With the Falcons (2-8, 2-5) determined to stop the Tribe’s vaunted running attack, Indians quarterback Sean Seabolt went to his two-minute offense and completed 7 of 10 passes in the first half for 123 yards and three touchdowns.  By halftime, D-B was on top 35-0 and the clock ran continuously for the entire second half.
Kris Wilson — kswilson@timesnews.net - Dobyns- Bennett quarterback Sean Seabolt (5) passes downfield during Friday’s game with Volunteer.


“It wasn’t pretty out there at times in the first half,’’ joked D-B coach Graham Clark. “But then my wife took me in when I wasn’t the prettiest thing around.’’

D-B took the opening kickoff and marched 55 yards on six plays, scoring on a 17-yard TD pass from Seabolt to Rusty Clark with 9:29 left in the first quart e r.

Volunteer responded by holding the ball for nearly five minutes but the Falcons’ drive stalled and they were forced to punt from their own 37-yard line.

The Indians’ Paul Slaughter blocked the punt attempt, then raced downfield, scooped up the loose ball on the 2-yard line and jumped into the end zone for the score. 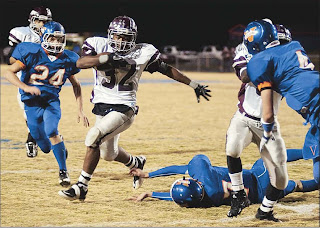 After stopping Volunteer on its ensuing possession, D-B took over on its own 46-yard line with 2:48 left in the first quarter. Four plays later, Chris Sensabaugh rumbled 19 yards to paydirt, dragging three Falcons’ defenders the final 5 yards to the endzone and giving the Tribe a 21-0 lead.  Early in the second quarter, after recovering a fumble on the Falcons’ 23, Seabolt connected with Seth Barger for a 26-yard touchdown and the rout was on.
Kris Wilson — kswilson@timesnews.net - Dobyns-Bennett running back Chris Sensabaugh (32) heads upfield against Volunteer during the teams’ Big 8 Conference regular-season finale Friday night in Church Hill. The Tribe led 35-0 at halftime and won 42-0.

“Our running game wasn’t going well early in the game so we went to our two-minute offense,’’ said Seabolt. “That opened things up and we took advantage of what they were giving us.’’

Seabolt finished his night’s work with a 24-yard scoring strike to teammate Derrick Steele with 8:38 left in the second quarter and they gave D-B an insurmountable 35-0 lead.

“We opened things up with our passing game tonight,’’ said Clark. “Coach (Darrell) Watson had the defense prepared. They bent a little but I thought overall they played extremely well.’’

Although the Falcons’ running game was thwarted by D-B’s front line, they did manage 85 yards passing in the contest.

“D-B has a lot of speed and are big and strong up front,’’ said Volunteer coach Scott Rider. “I was proud of the fight our guys brought to the game tonight. We just ran into a very good football team.’’

Sensabaugh finished with 43 yards on 11 carries for the Indians. Maurice Cannon rushed twice for 65 yards.
Posted by douglassriverview at 5:19 AM