More than 40 new houses have been built on the former Riverview Apartments site.

KINGSPORT — The HOPE VI project — a multimillion-dollar redevelopment of two distressed city neighborhoods — is expected to wrap up later this year, with the latest milestone being the completion of more than 40 new houses on the old Riverview Apartments site. 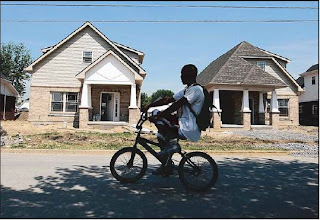 In October 2006, Kingsport received an $11.9 million HOPE VI revitalization grant from the U.S. Department of Housing and Urban Development. The grant funds, along with additional monies from the city, went toward transforming the old run-down dwellings in Riverview and along Sherwood/Hiwassee with new, single-family houses for purchase and rent.
The first phase replaced 29 houses along Sherwood and Hiwassee with 24 new, affordable homes, while the second phase called for 32 rental houses and duplexes built on the old Riverview Apartments site and six additional houses built in the Riverview community.
The Sherwood/Hiwassee homes have all been sold and according to Doris Ladd, director of the HOPE VI project, all of the houses in Riverview have been built and will soon be occupied.
“We’re progressing very well. We’ve received certificates of occupancy on all 38 houses and all of the substantial completion certificates,” Ladd said. “We have 10 currently occupied, we’ll have four more next week and the balance are to occur over the next month and a half with all occupied by the end of November.”
Ladd said all that remains to be done at the houses is landscaping and some paving on the Martin Luther King Jr. Drive end of the neighborhood, which should be completed by the end of next week, weather permitting. The contract has a Nov. 1 completion date.
Sixteen single-family houses and eight duplexes have been built on the old Riverview site, along with six off-site houses — all of which will be public housing rental units. The houses are roughly 1,500 square feet and in the same model as those built along Sherwood and Hiwassee, with the houses being three bedroom/two bath and the duplexes being two bedroom/two bath.
According to Maria Catron, the HOPE VI Community Support Services coordinator, original Riverview Apartments residents are coming back to occupy 19 of the 38 new houses. Catron said of the 38 households, 10 are elderly and/or disabled while 28 will be working or in school. Approximately 75 eligible families are on the waiting list for future consideration of the houses.
The YouthBuild project has also built and sold six houses in the Riverview community, with two more under construction and contract, Ladd said. The Kingsport Housing and Redevelopment Authority facilitates the sale of these houses.
YouthBuild USA is a community development program that works with troubled young men and women 18 to 24 years old, helping them earn a GED, learn job skills, and work on building affordable housing.
The only other aspect of the HOPE VI project left to complete is the community center at the newly renovated and expanded V.O. Dobbins Sr. Complex. Under the guidelines of the HOPE VI Grant, the KHRA had to create community space in the Riverview neighborhood, since the old space went down with the demolition of the Riverview Apartments complex. The KHRA and the city decided the best place for the space would be to attach it to V.O. Dobbins.
This $1 million project, funded by the KHRA, was substantially completed on Oct. 1; furnishings have not been purchased yet and Ladd said the Fresh Start office and training center would be moved in by the end of November.
“As the original plan was scoped out, this will wrap up (the HOPE VI project),” Ladd said. “We have a lot of paperwork to finish it off, and over the next two to three months we’ll close up on the project.”
The KHRA owns most of the properties along Martin Luther King Jr. Drive and according to Ladd, the authority plans to have a strategy session later this month to look at what could be built along this street. Retail and apartments would be ideal, she said.
To help win the HOPE VI grant, the city of Kingsport and the KHRA moved forward with two “leveraged” projects, and as Ladd explains, to show there is community support for the revitalization of the area.
“By showing that other projects are going on in the same area, that helps us to win the grant,” Ladd said.
The two leveraged projects were the renovation of the old Washington Elementary School into an affordable senior housing complex and the renovation and expansion of the V.O. Dobbins Sr. Complex, which officially opened last month.
Posted by douglassriverview at 1:27 PM