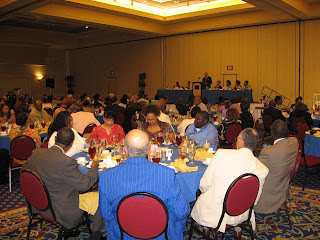 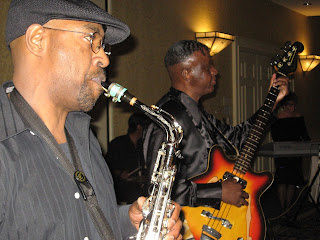 It's our time to "dress to the nine's," "strut our stuff" and "wine and dine" at one of the Douglass Alumni Association's highlight events, the Douglass Alumni Association Banquet and Dance. Held at the Meadowview Convention Center, this formal event allowed the Alumni to feast on a delicious meal, listen to business matters of the Association, and listen to a dymanic speaker. Our Douglass Athletic trophies were also on display at the banquet.
Mistress of Ceremonies Sandra Wilmer welcomed the group to the banquet and dance, and also presided over the drawing for door prizes.
Speaker Ed Horton had the group "oh'ing and ah-ing" as he took them on a walk down Memory Lane, invoking the memory of his grandmother, our beloved Hattie Ray Horton. Although he grew up in Riverview and attended Douglass High, Ed's career had taken him all around the country living in different cities and cultures. Once he'd seen the lights of other worlds, Ed decided it was a good time to come home (coincidentally, the motto of this year's Reunion), and he spoke of the differences between big-city life and small-town culture.
His speech often set the audience to poking each other and giggling, as they apparently identified with many of the neighborhood situations he was talking about. If you didn't know any better "as the world turns," you'd think "all my children" only had that "one life to live," growing up "young and restless" with plenty of "passions" always looking for that ever elusive "guiding light," but quietly bound for the "general hospital" to get that personality makeover to grow up as one of the "bold and the beautiful," but not telling anybody about THAT.
Plaques were also presented to Van Dobbins Junior for his wonderful humanitarian efforts in the community.. Virginia Hankins for her tireless and heroic efforts within the Douglass Alumni Association.. and your website manager Calvin, for doing what comes natural.. keeping Douglass Alumni and the Riverview-South Central Kingsport area informed and fired up about that wonderful Douglass School Spirit.
WCYB-TV, Channel 5, Bristol also attended the banquet to do a news story. Reporter Nick got information from Alumni President Louetta Hall, and yours truly spoke of the discipline that was dealt out to schoolchildren by Douglass teachers, who were concerned that we LEARN from discipline, and not be INTIMIDATED by it. The Channel 5 story aired later that night, during the 11 PM newscast.
At times, our dance and banquet festivities competed soundwise with a traditional wedding next door and an African wedding across the hall (in fact, when some of OUR folks came back into our ballroom looking disheveled, hair all out of place, dress straps all off center, and them trying to readjust their dresses and shoes, we found out they'd snuck out and went next door to dance with the revelers at the African wedding--folks, those wedding participants had been there all day, and at 12 MIDNIGHT, them people were still going strong).
After feasting on chicken marsala, roast beef, southern green beans, red-skinned potatoes and wild rice, OUR banqueteers danced those calories away to classic numbers by our own Scat Cat Band, and lead singer Kenneth Springs (still rocking and rolling after all these years). The Scat Cats were good.. so good in fact, that some of the AFRICAN revelers came over to hear them later in the evening.. so did other Meadowview visitors who'd remembered the original Scat Cats from years ago. The dance lines at the Banquet were just great, and one of the highlights of the evening was St. Mark's Reverend Doug Tweed dancing with Mrs. Pinkie Horton and Mrs. Ethel Ruth Russell.. just a beautiful memory to cherish.
The banquet and dance was a fitting ending to a most wonderful day of celebrating our Douglass High School heritage, and it leads up to the most solomn of occasions.. the Douglass High School Alumni Association Memorial Service on Sunday.
Posted by douglassriverview at 10:19 AM