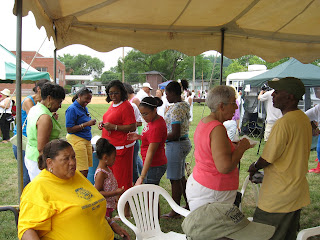 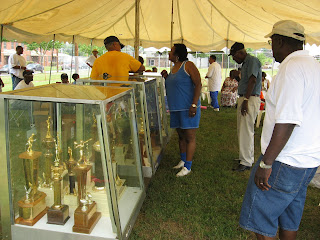 The Douglass Alumni Field Day is a joyous event that brings all of the alumni together on the old ball field, where we used to gather and watch our Douglass Tiger Football Team practice during the 50's and 60's. It's necessary that the Alumni reconnect there, because the historic ground we reunite on, is the same ground traversed by our foremothers and forefathers during the days when Douglass School was a rallying point in the community (pretty soon, it will once again, become that important pillar in the history of our community).
Field Day is an excitingly close and intimate gatherings, and there were plenty of vendors selling their wares. The smiling faces with fish plates from A & V Fish and Mrs. Ethel Ruth Russell's Food Tent let everybody know that they'd better head on over and get their's before it all got gone! Also, there was a jewelry shop, Candles By Gail (Evans), and Bingo, hosted by 2007 Alumni President Louetta Hall. Music of the 50's and 60's was provided by D.J. Richard Ford.
A special highlight was the exhibit of our beloved and memorable Douglass High School Athletic Trophies, not seen altogether in the past 40 years. Even the ones that were damaged during storage at Dobyns-Bennett were repaired and polished up just in time for the Reunion, including the 1946 State High School Basketball trophy won by our Douglass Tigers. Only three of the original basketball players, Bobby Joe Johnson, Vernell Allen and Wynn Brown are still with us, with Vernell Allen making All-State that year. Unfortunately, we lost another distinguished player from this team, Wallace Bly on Thursday, June 28th, on the eve of our Reunion.
Hopefully, visitors got to see the trophies because if they did, they got an extra added historical treat. The display cabinets provided by Van Dobbins, Junior were originally owned by Reverend C. E. Edge, and were some of the actual display cases that Reverend Edge had in his store on Lincoln Street.. that's right. The same cases that we pressed up against generations ago to pick out candy, potato chips and other treats from our beloved Rev. and Mrs. Edge in their store, were, years later, still carrying the torch for our historic trophies.
WJHL-TV, Channel 11 also attended our Field Day to do a story. Channel 11 Reporter Amber Miller and Photojournalist Shawn Miller did a story that highlighted the Field Day get-together with 2007 Alumni Association President Louetta Hall, the Douglass High Athletics Trophy display, Bobby Joe Johnson and the 1946 State Basketball Tournament trophy he helped earn for Douglass High School, and the 1964 Girls State Basketball Trophy, with three of the players on that team, Jenny Hankins, Roberta Webb and Andra Watterson. The Channel 11 story on the Reunion and Field Day aired Saturday night on the 6 PM and 11 PM newscasts.
We were lucky this Reunion because the much needed rain the area needed, held off just long enough for our Field Day to be held (probably good, too because the bug level was very low). Then it was on to another important event later that evening, the Douglass Alumni Association Banquet.
Posted by douglassriverview at 10:20 AM