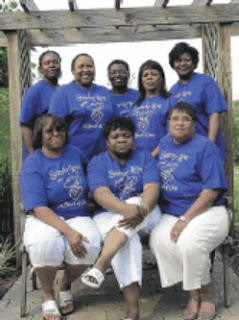 
So impressed were the members of Sisterly Love with Oprah Winfrey’s Legends Ball that they’ve decided to hold a similar bash honoring women who’ve made a difference in their lives.
Though their ball, set for Sept. 15, won’t be quite the spectacle as Oprah’s ball — a three-day celebration that honored 25 African-American women in the fields of art, entertainment, and civil rights — Sisterly Love’s Legends in White ball will be just as heartfelt.
Each of Sisterly Love’s eight members have invited three women to be honored.
“I’ve known these ladies for a number of years and have seen things that have made a difference in my life,” Patricia Winton said of those she has invited.
Linda Wade’s mother-in-law and daughter-in-law will be two whom she honors, the latter for the hard work and dedication she’s shown in her quest to become a doctor.
Carolyn Smith will honor a fellow minister.
“She was with me when I gave my life to the Lord,” she said.
One woman, Kathryn “Chi Chi” White will become an “honorary honoree.” She was chosen by consensus among the members. White has served as a friend and mentor to the women of Sisterly Love for many years.
“She always jumped in and helped us when we needed her,” said Ramona “Twinkle” McClintock.
On Sept. 15, the 25 honorees will be picked up by limousine at Shiloh Baptist Church and taken to MeadowView Conference Resort and Convention Center for a luncheon, fashion hat show, fellowship and a time to be honored.
At 7 p.m., they will gather again at MeadowView for a non-alcoholic formal ball. Members of Sisterly Love and their legends will dress in formal white. Music will be provided by DJ Express. Sisterly Love has extended an invitation to Winfrey to attend and speak at the ball. They’ve also contacted author, motivational speaker and recording artist Juanita Bynum to be a guest speaker.
Sisterly Love is a Christian, non-profit social organization whose goal is to help and give back to the community in a loving and godly way. The group was formed by the late Karen Schofield seven years ago.
Legends in White will serve as a fund-raiser for the organization’s annual scholarship fund, awarded to local high school graduates.
This year’s scholarship winner is Samuel Mbarathi, a 2007 graduate of Dobyns-Bennett High School. Mdarathi will attend Tennessee Tech this fall.
Sisterly Love’s other charitable projects in the past have included supporting local battered women's shelters; donating backpacks filled with school supplies to underprivileged children at area elementary schools; providing financial assistance to fire and flooding victims; preparing Thanksgiving baskets for needy families; making financial donations toward funeral costs; and sponsoring a contest in the Little Miss Vision pageant.
The luncheon is ladies only. The evening ball is open to anyone. Tickets are $25 for each event and can be purchased from any Sisterly Love member, or by calling Chynet Hale at 378-4575, Mary Watterson at 378-5319 or Ramona McClintock at 378-5028.
Anyone interested in joining Sisterly Love, or contributing to the scholarship fund can contact any club member.
Posted by douglassriverview at 9:28 AM