A Gospel Extravaganza Coming To Kingsport! 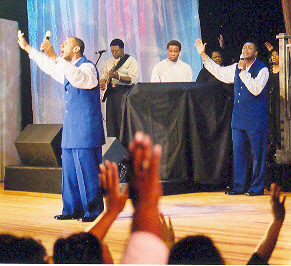 The Williams Brothers will be in concert at MeadowView on Saturday, July 28th.

Originally known as "The Little Williams Brothers" when they were organized by Leon "Pop" Williams in 1960, the group recorded its first album in 1973. Since then, they've recorded 18 Top-10 albums, out of which came three Number One songs and three Grammy nominations.

Their hits include "Coolin' Water," "Jesus Will Fix It," "At The Cross I'm Just A Nobody," and "Sweep Around Your Own Front Door." Their song "This Is Your Night" reached Number 4 on Billboard's Gospel Chart. Their recording of "In This Place" reached Number One on the Billboard charts, which was also nominated for a Grammy Award in the Best Soul Gospel Album (Traditional) category.

In April, 1991, the group formed its own record label, Blackberry Records, which is the first black-owned and operated record label in Mississippi that has major distribution.

The concert will be on Saturday, July 28th at the MeadowView Conference and Convention Center in Kingsport. Doors open at 6 PM and the show begins at 7 PM. Tickets are $15 in advance and $20 at the door.