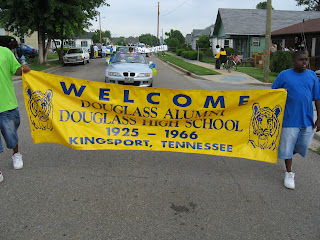 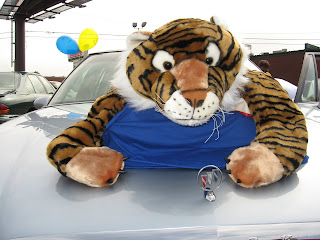 We love a parade!
And when the parade is about Douglass High School, and the participants all have the Douglass Tiger Spirit, we are loud, noisy, boistrous.. and proud of it!
That was the atmosphere surrounding the 2007 Douglass High School-Kingsport Parade on Saturday, June 30th, that wound its way along the streets of South Central Kingsport and the Riverview Neighborhood, where crowds lined the streets to cheer the parade along.
Parade Coordinator Organizer and Douglass Alumni Ozine Bly and Jack Pierce organized the parade, which included 20 vehicles, 25 to 30 parade participants, with between 50 to 75 folks marching.
With sirens blaring, the Kingsport Police Department opened the parade with an escort, followed by the Kingsport Fire Department's Ladder One Fire truck based out of Station One on Island Street. It was driven by our own Lennie Springer, who holds the distinguished position of Fire Truck Engineer.. Lennie delighted the crowds with the familiar fire truck soundings as the truck passed by.
Also in the 2007 parade were Joyce Goodson Dungey, Miss Douglass 1953, representing all of our beautiful past Miss Douglass's.. our precious New Vision Youth, headed by Johnnie Mae Swagerty, and a wonderful dance by Mary Kathy Pride. Those special events were crowd pleasers. Also getting rousing cheers when it passed by was the Douglass Tiger, perched on the vehicle hood of our 2007 Douglass Alumni President Louetta Hall.
To give all residents of Riverview and South Central a chance to experience and renew their connection to the Douglass School Spirit, the parade began on Dale Street at the Center Street intersection, continued through Dale Street (which was the first neighborhood established for African-Americans in Kingsport prior to Riverview), then it turned right onto Wilcox Boulevard, under the railroad bridge, and then right onto Lincoln Street into Riverview.
From there, the parade went down and took a left onto Dunbar Street, and around to Louis Street and concluded at the Douglass Ball Field. D-J Richard Ford, who also took part in the Parade, was ready to provide the music for the next Reunion event, the Douglass Field Day right there at the Ball Field.
Posted by douglassriverview at 10:20 AM