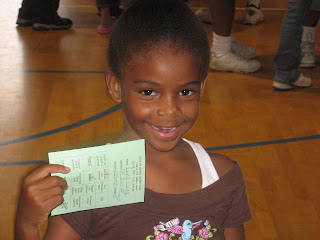 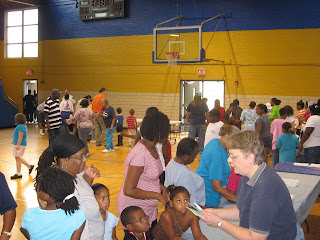 Remember the days when back-to-school for us Douglass students meant nothing more than going back into the classrooms to meet our new teachers for the next year?
Remember how the classrooms smelled..they SMELLED like classrooms. Walking back into the Douglass School building, always brought back memories of desks that were marked up, posters on the bulletin boards and new books on the shelves (actually, they were USED books, but they were new to us). The elementary teachers told us what we'd be studying all year, and what would be expected of us. Upper classmen who came in to register, always considered it a chore, but knew it would put them one step closer to graduation. There might be light refreshments in the cafeteria. It was a scary time because, even though we knew all of our classmates, everybody was apprehensive about hitting the books again.
These days, back to school after a summer break at the Splash Pad or riding the streets of Riverview and South Central Kingsport, is considerably different for kids, in fact, they've got it better than we did. This year, as in the past eight years, kids in the neighborhood were eased back into the reality of school books and studying, by attending the Back To School Celebration, held at the V. O. Dobbins Community Center this past Saturday, July 28, 2007.
Many local agencies set up booths to answer questions from the parents, and had little gifts and toys for the kids. Each parent registered their child for the upcoming year, and once the business end of registration was taken care of, it was funtime for the kids.
Sponsored by the Weed and Seed Program, South Central Kingsport Development, Incorporated, and the Kingsport Community Development Corporation, the Back To School Celebration featured a demonstration by the Kingsport Police Department's K-9 Unit. "Zach" is one of two German Shepherds that local police use to sniff out narcotics and other abused drugs, and Zach is also trained to detect explosives. As seen in the pictures in the PHOTO GALLERY, "Zach" considers ripping at and pulling on a sleeve as a play activity. When pointed and released on a suspect, that suspect's arm sleeve or pants leg is thought of to be part of the same play activity, and it usually results in surrender and takedown of that particular suspect. The kids were glued to the demonstration, and as exhibited by their questions afterward, the kids got a object lesson to never find themselves on the BUSINESS end of a police dog.
After visiting the booths inside the Douglass Gym, the kids and their parents feasted on pizza, Big Orange Kool-aid, and cookies and left with a real good feeling about the upcoming year.
Our Douglass teachers would be proud of the turnout!
Posted by douglassriverview at 9:01 PM