Starting Job With Jaguars Makes This Pivotal Year For Sensabaugh 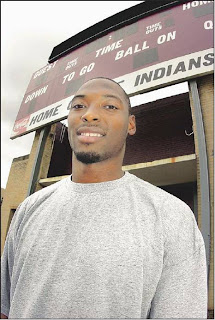 A MAKE OR BREAK SEASON FOR ONE OF OUR OWN


KINGSPORT — Gerald Sensabaugh enjoyed a standout career at East Tennessee State and North Carolina. But when “Monday Night Football” comes calling, Sensabaugh gives a different answer when asked to name his school.
“My rookie year when I had to tell the school I went to, I said Dobyns-Bennett,” said Sensabaugh, a defensive back with the Jacksonville Jaguars. “I had fun at both those schools, but I can honestly say that Dobyns-Bennett is where I felt that I was treated the best.”
Sensabaugh has a place in Jacksonville, but he still calls Kingsport home. Sensabaugh recently built a new house in town, his 1-year-old son Jaren lives here and he frequently returns to his alma mater. On Tuesday, Sensabaugh attended a seven-on-seven scrimmage at D-B, during which he gave this interview.
“When I have my bye week I usually stop by — especially if they have a home game,” Sensabaugh said. “I just like the tradition here.”
Sensabaugh’s exploits at the highest level of football are adding to that tradition. He heads into Jaguars’ training camp, which began Friday, as the projected starter at strong safety.
The Jaguars have their first practice today.
“It’s a dream come true for him to be going into camp as the starting safety for an NFL team,” said Brian Barrett, Sensabaugh’s position coach at D-B. “I’m elated. It makes me feel like I’m on cloud nine.”
Sensabaugh has started a handful of games in his first two seasons, but only in spot duty to replace an already established starter. That opportunity emerged when the Jaguars cut veteran Donovan Darius.
“He actually made an announcement in the locker room before he went out to one of our OTA (organized team activity) practices that he was being released,” Sensabaugh said. “He showed me a lot of the ropes coming into the league and we’re going to miss him dearly.”
Sensabaugh also will be a restricted free agent at the close of the 2007 NFL campaign — which means a breakout season could lead to big bucks in the offseason.
“I’m just ready to go out there, play, show the world what I can do,” Sensabaugh said. “Jacksonville’s given me a chance to start and I’m going to have to run with the opportunity.”
Sensabaugh says he’s enthusiastic about the Jaguars’ chances to contend this season.
“We’re going out there to win the Super Bowl,” he said. “We had three losses late last season that kind of kicked us out of the playoffs, but this season we’re going into this year with a fresh start. And we’re going to show the world that we are champions.”
After stumbling late last season, the Jaguars are eager to return to the playoffs, where they played at New England in the 2005-06 season.
“The playoff environment’s totally different from the regular-season environment,” Sensabaugh noted. “The fans are louder, it’s more intense, it’s nationally televised. We lost that game but it was an experience.”
Several in Sensabaugh’s family have had experience in big-time college football. Two of Sensabaugh’s cousins played at Division I schoolsl — Boo Sensabaugh at West Virginia and Teddy Gaines at Tennessee. Another, Coty Sensabaugh, is headed to Clemson where he will be a true freshman this fall.
“He’s enrolled in summer school so he’s getting a jump start on his education,” Gerald Sensabaugh said. “I wish Coty the best of luck. He knows he can always come talk to me about anything.”
Gaines is on the D-B football coaching staff this season, and teaches at John Sevier Middle School.
When Sensabaugh’s days in the NFL are over, he said he might end up on the Tribe sideline himself — noting he told Indians coach Graham Clark “a long time ago I would like to.”
Leaving the game before sustaining permanent injury also is a factor.
“I’d like to get out before I’m too banged up,” Sensabaugh said. “I still want to be able to spend time with my son.
“There’s a lot of guys who can barely walk and they need walking assistance. I don’t want to end up like that. My body will let me know when I need to slow down, but I’m nowhere near that point right now. I’m still young in the sport — only 24 years old.”
And poised for a potential breakout year in the NFL.
Posted by douglassriverview at 10:25 PM