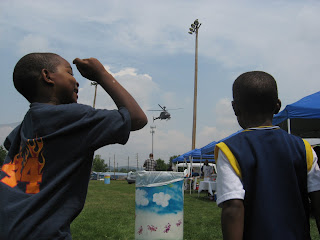 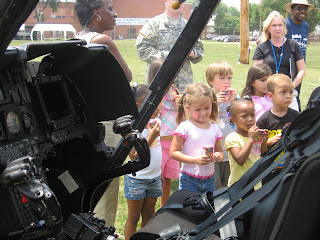 Several students in one Headstart class in the Douglass School building got a special treat on Monday, July 16th. An OH-58 D Army helicopter flew in for a visit!
The OH-58 D is a special Army attack scout helicopter, based out of the McGhee-Tyson Air Force Base in Alcoa, Tennessee, that occasionally makes visits to kids for educational purposes, and on various missions for the state of Tennessee.
Pilot and Chief Warrant Officer Scott Mason of Piney Flats, Tennessee says, the helicopter, which has flown missions in Kosovo in 2004, is a seven-million dollar, state-of-the-art helicopter, with its own digital video system, and a high-speed internet connection that bypasses the use of a radio if the crew needs to contact our forces during combat.
The sound of the approaching helicopter from the northwest of Bays Mountain immediately got the attention of the kids. After a couple of circular passes over the Douglass Ball Field to get the right wind angle to drop down, the chopper landed in the wide area between the baseball field and Lincoln Street, right in front of the Riverview Apartments. The kids could hardly contain their excitement, but had to wait for clearance to get close, and once they could approach the big chopper, the questions and comments flowed like just-made strawberry Kool-Aid on a hot day.
"Actually, they ask very good questions," Officer Mason says. "But the first question they want to know is, is that piece of metal that sticks out of the front, a gun?"
Actually, that little pipe that sticks out, right in front of the chopper itself just below the windshield, is an air flow indicator to help the motor regulate the air that helps control the chopper motor (there's a picture of it in the Douglass Head Start Helicopter Visit album in the PHOTO GALLERY).
Kathy Sensabaugh, the Headstart teacher, says the event was a sort of field trip for the kids, ages four and five. She says, they also get to go to the Knoxville Zoo, the aquarium in Gatlinburg, and the Hands-On Museum occasionally. The helicopter visit was part of their Nature Trip, and eleven kids got to see the chopper and crew.
"They keep us busy," she says, "and now, they'll have the helicopter visit to talk about tomorrow."
But Officer Mason says, for him and fellow crewman Sergeant Doug Edmisten of Knoxville, showing the helicopter to the kids, is more fun for the CREW than it is for the kids.
Posted by douglassriverview at 9:37 PM