The Tams Wow 'Em In Riverview! 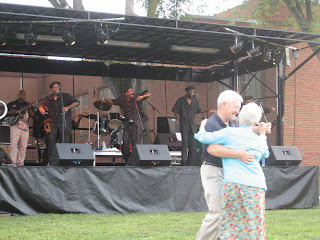 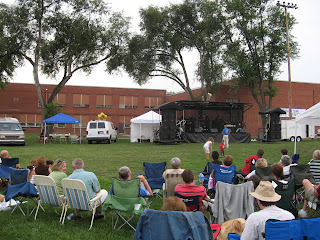 THE TAMS GET 'EM DANCING

The original Tams took a Fun Fest crowd down Memory Lane at the Douglass High School Ball Field on Monday, July 16th.
The group, featuring Robert Lee Smith and the original Tams, Little Red Cottle, Joe Jones, Robert Arnold, Reginald Preston, and founder Charles Pope, took to the stage and totally impressed the crowd by doing several favorites by other artists.. then, they launched into their hits that made the group memorable.
"What Kind Of Fool (Do You Think I Am)" brought the crowd to its feet. First recorded in 1963 (where were YOU in '63?), the song quickly rose to the Number One spot on the Billboard charts. A later hit, "Be Young, Be Foolish, Be Happy" from 1968 prompted many in the crowd to jump onto the Douglass Ball Field to dance and "strut their stuff," with older couples who grew up with the music, mixing in with their younger counterparts. Another crowd-pleaser, "Hey Girl, Don't Bother Me," became a Number One hit in Great Britain, but kept the crowd in a dancing mode.
The crowd, estimated to be over 500 people, was lulled into the mood before the Tams took the stage, by the Tams Band, with Doug on guitar, Keith on bass, Greg on drums, and Louis on the electric piano (he's also the Tams' musical director). By the time the Tams were ready to take the stage, the crowd was fired up and rarin' to go.
Food vendors were set up along the fence row beside the tennis court, and the local National Guard post brought its "Climbing Wall" to tempt the more adventurous kids, while their parents were enjoying the concert. Little kids were treated earlier to a mechanical train that moved around the Ball Field, picking up and dropping passengers as it went along.
The concert and the events surrounding it was a fantastic way to get the community out, and was reminiscent of many of the programs our parents and neighbors used to hold, that gets everybody into the great community spirit we all remember.
The "Rhythm In Riverview" event was free, and sponsored by Eastman Chemical Company, the Kingsport Housing and Redevelopment Authority, Nathan Vaughn-State Farm Insurance, South Central Kingsport Community Development, Inc. and Radio Station WKOS-FM.
Posted by douglassriverview at 11:08 AM