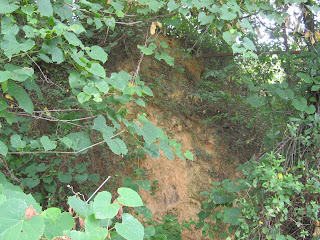 AT RIGHT, THE LITE BROWNISH CLAY THAT LOUETTA REMEMBERS FROM CLAY HILL

Growing up in Kingsport and living in the Riverview Community, there were a lot of children in the neighborhood. It was a safe time for kids. We had a playground right in the middle of the projects, and we utilized it quite often. Our parents could come to the door and see where we were.

Would we slip off sometimes? Of course, we would. We would soon get bored with the swings, seesaw, sliding board, hopscotch and jack rocks.

As sure as my name is Louetta, someone in the bunch would say "let's go to Clay Hill." We always went up in the weeds behind the part of Dunbar that's next to the brickyard, so nobody would see us. Then we'd go on Clay Hill behind Jason Taylor's house, but you could get there quicker between Mr. Dobbins and Mr. Sneed's houses. I'm sure we must have looked a little like "The Little Rascals," because the group would range differently in age. Sometimes, it would be as many as ten of us.

Clay Hill was a fun place. It was like a miniature mountain located between Industry Drive and Dunbar Street in the residential area known as Riverview. Clay Hill was a stretch of hilly land that flattened out on the top.

I don't know who named it, when it was given the name "Clay Hill, or how long it was called that before I started going. My uncle Bravell and my Uncle Levenus always talked about going to Clay Hill. The name was fitting because that was what it consisted of, slate and red clay. You could dig big chunks of clay out of the ground. We often used the clay at school to do crafts, we carved it into different objects. I remember my other uncle Edward McClintock who could do almost anything, sculptured my grandmother Evelyn McClintock a beautiful elephant out of the clay from Clay Hill. He baked it in the oven, then painted it gray. I was fascinated. Over time, it got knocked off the coffee table and its trunk got broken off.

Clay Hill was also a forbidden place. Our parents would say "don't go on Clay Hill." Well, that was like saying "sick-em" to a pit bull. Because of the trees, it was a cool place for us to escape the summer heat when school was out. There were all kinds of trees.. wild apple, paw-paws, persimmon, hickory and walnuts. There were wild grapes and different kind of berries. I loved the smell of the woods and honeysuckle when it was blooming. You could see rabbit, squirrel, weasel, snakes, frogs, and butterflies of all kinds. It was Nature at its best.

I remember a deep open pit with water in it, and we would swing across it on some old vines entangled in the overhanging trees, but draped over the pond. I'm sure snakes were in that pit, but we kids never thought of any danger. We worried more about being caught up there.

Clay Hill was a source of a lot of things. People would go to Clay Hill at Christmas time and select a Christmas tree. I can remember one Christmas our Douglass Third Grade Christmas Tree came from Clay Hill, and we made our own decorations to hang on it.

On the days we would slip off to Clay Hill, we would romp, jump and holler so that our echo would come back to us. After a while, we would head home.

Did we get into trouble? You bet we did. How did our parents know we had been to Clay Hill? Our clothes would have cockberries and stick-tights all over them, not to mention the red clay on our shoes. If we went after a rain and slid down the hill to come home, the back of our pants and shorts would be red and light brown with muddy clay. That clay would stick to your shoes like glue. It was best to let it dry and then beat it off. If the dogs went with us, they came back covered with ticks.

Oh, we loved Clay Hill! It was not enough to play on it, we also ate it. To me, it had a good taste. We had a saying.. we said to each other, "you gotta eat a little Clay Hill dirt before you die!" To me, it tasted like the way it smells after a rain on a hot summer day. Talk about being close to Nature! It wasn't because we were hungry..our parents fed us well. Sometimes we would sneak potatoes and onions out of the house and cook on Clay Hill. Once, our Douglass School Fifth and Sixth Grade teachers took both classes to Clay Hill for a picnic. I packed my own lunch; I remember it was a peanut butter and jelly sandwich wrapped up in wax paper. The zip-lock bag wasn't even thought of back then. I also had a Pepsi in a glass bottle, we used to put peanuts in the Pepsi. I packed it in a brown paper bag (OOPS..I'm telling my age). Anyway, we stayed a long. It felt good to be on Clay Hill.

One Christmas, most of the boys in the neighborhood got Red Rider BB guns. My brother Johnny Stewart got one. He and some of his friends got caught shooting birds off the power line, which, of course was a no-no, so off they went to Clay Hill to shoot whatever.

Clay Hill was a good source for digging earth worms to fish with. I hated when the boys came back with the worms, because the girls didn't like worms and the boys knew it. If they thought you were afraid, they would chase you with them.
It was also a good source for root tea, like sassafras, it was plentiful them.

Why am I writing about Clay Hill? It is part of my childhood which I enjoyed. Did you go to Clay Hill? I would love to hear about your adventures. I hear it no longer looks the same because industry has quarryed it out. I might visit it before long, just to see what's left of it.
Yes.. those were the Good Ole Days!