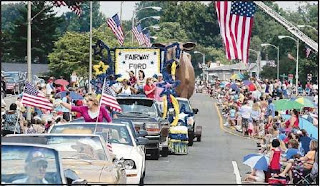 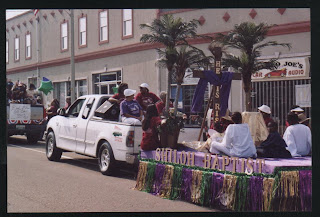 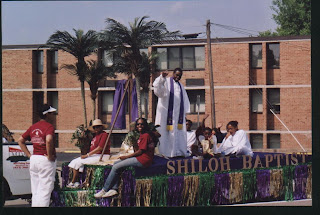 When your message is about spreading the Good News about Jesus Christ, the folks at Shiloh Baptist Church have got a great way to spread the Word.
Shiloh Baptist Church of Kingsport won the first place award in the Church Float competition during Kingsport's Annual Fourth of July Parade for 2007.
About 7,000 people saw Shiloh's float and the equally beautiful floats from at least five other churches in the area. Joe Fuller of Nickelsville, Virginia.. Kenny Fannon of Duffield, Virginia, and Martha Walker of Kingsport were the judges, who also judged floats under the three categories, business, civic and church.
Shiloh was Number One in the Church category. The Fire Escape Youth Group of Kingsport won the second place award, and in third place was the Oak Grove Baptist Church of Church Hill.
"Everybody did a great job on their entries," says Fuller.
Reading the article about the parade float winners in the Kingsport Times-News was the way folks at Shiloh found out about their winning entry. The Shiloh float took two days to build, and working on it were Shiloh Pastor Kenneth Calvert, Mr. and Mrs. William McClintock, Mr. and Mrs. David Black, Mr. and Mrs. Jack Pierce, Barbara Bristol, Louetta Hall and Sandy Wilmer. The theme of the float was "Jesus and the Children," which included Pastor Calvert as the Christ, ministering to local church children.
I'm told, there will be another float from Shiloh in the Fourth of July Parade next, and it will be even better next year!
Congratulations to our Brothers And Sisters In Christ at Shiloh for a job well done, All In The Name of the Lord!
Posted by douglassriverview at 10:34 PM