Eddie George Goes To Extremes at the Douglass Ball Field 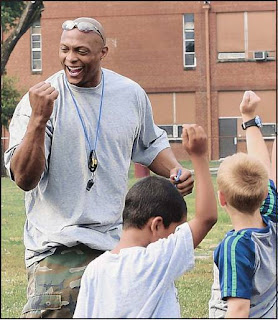 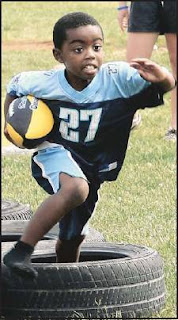 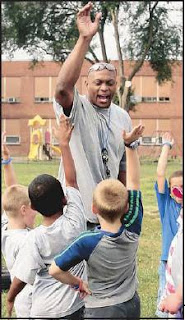 KINGSPORT — Eddie George is a fit guy. Playing 10 years in the National Football League is enough justification for most.
And now that his NFL career is over, the former Tennessee Titans running back is using his fame, and knowledge, to spread health and fitness awareness throughout the state of Tennessee.
George, a spokesperson for Gov. Phil Bredesen’s GetFitTN program, landed in the Model City on Tuesday to lead local youth in the inaugural Extreme Challenge, a three-day wellness/fitness camp hosted by the Mountain States Health Alliance (MSHA) and Kingsport Housing and Redevelopment Authority at V.O. Dobbins Community Center.
“I’m here to promote a healthy lifestyle, it’s as simple as that,” said George, who captured the 1995 Heisman Trophy as a senior at Ohio State U n i v e r s i t y.
“I just want to help these kids be active and have fun at the same time.”
Appointed as spokesman for GetFitTN in October 2006, George has since been traveling the state educating children about Type 2 diabetes — the main objective of the initiative — while promoting a healthier, more active lifestyle.
Though the Extreme Challenge, part of the city’s Hope VI project, is not directly related to GetFitTN, George did, in fact, have a connection — one of the principal partners in his landscape architecture firm, The Edge Group, also serves as chief designer for Hope VI.
“He liked the concept and was willing to donate some of his time to kick off this first annual event,” said Maria Catron, who serves as Hope VI program coord i n a t o r.
“We all have the same agenda, to promote healthy lifestyles.”
This week’s event jump-starts a five-year plan, as part of Hope VI and sponsored by MSHA.
“We decided to get involved because it was the right thing to do,” said Vivian Crymble, community and government relations director for MSHA.
“This is a very natural thing for us, to be a part of, and give back, to our community.”
George has been giving back to the community through various outlets for years. So when the opportunity to be aligned with Gov. Breseden’s program was presented, it only made sense to jump right in.
“I was initially creating my own brand with EGX Lifestyle, a company devoted to promoting healthy living,” said George, who was recently joined by University of Tennessee football coach Phillip Fulmer on TeamTN, Breseden’s group of official GetFitTN spokespersons.
“So when I was asked by the governor to join his initiative, it was a natural fit. It gives me a bigger platform to speak and to inspire from.”
The former Titan, who finished his football career with the Dallas Cowboys, has inspired plenty of people — both young and old — during his time in Kingsport, according to Catron.
“It really has been a great thing for this first year,” Catron said of having George in attendance.
“I think the greatest thing, though, is that each of these kids has got some one-on-one time with him,” she added. “He motivates them, cheers them on; he’s been fantastic.”
George will return to V.O. Dobbins today (Wednesday) to present awards, but then it’s back to laying the groundwork for GetFitTN — a program less than a year old.
“We’re really just starting,” George said. “We’re still putting the pieces together. We’re just out here being soldiers and trying to make some things happen.
“And we can make things happen by coming to communities like Kingsport, and not just by being out there and promoting, but by making others think about why it’s important to be healthy.
“We want to make healthy lifestyles cool.”
Posted by douglassriverview at 12:26 AM