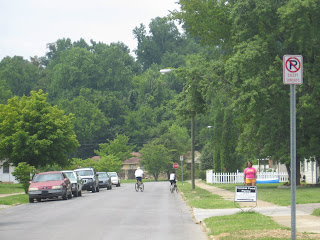 CLAY HILL, RISING BEHIND THE HOUSES ON DUNBAR STREET, AT THE END OF CARVER STREET

MORE PICTURES FROM CLAY HILL IN THE PHOTO GALLERY..PLEASE PAY ATTENTION TO THE PICTURE CAPTIONS FOR REFERENCE POINTS TO SEE WHERE THE PICTURES ARE FACING.


We're introducing a series of stories on Clay Hill. We all remember Clay Hill, the area directly behind the homes on Dunbar Street in Riverview.
To our industrial neighbor General Shale next door, Clay Hill was a dumpsite for all of the chemicals used in their brick-making process; also, where they took old, worn-out equipment to rust away. Of course, it was private property, "no trespassing".. off-limits to anybody except General Shale people.
But to dozens, perhaps hundreds of Riverview-South Central-Douglass boys and girls, Clay Hill was an unofficial community playground. The small steel and metal swings in the projects and behind the Douglass School easily became dull and boring after a while.

And then there was Clay Hill.

There were three ways to go up Clay Hill. Behind the Ruffin's on the lower end of Dunbar Street (that path had two levels going up), between Papa Sneed's house and Mr. Dobbins' house in the middle of Dunbar (probably the most popular entrance), and behind Jason Taylor's house on the upper end of Dunbar, where you beared around to the left and picked up the road the Brickyard built to haul spent chemicals and equipment into their dumpsite.

Once you arrived on Clay Hill, it was like stepping into a different world.

Through the dozens of paths that went either over or around the many solid rock hills and mounds and through the valleys, Clay Hill was a treasure trove of new activity, adventure around the crest of every rocky hill, excitement along every pathway, and uncertainty lurking underneath every underbrush. If you were lucky enough to lay claim to one of the old pieces of discarded machinery that the Brickyard abandoned on "The Hill," it was your job and the job of your friends to protect it from the bigger kids that also made Clay Hill their playground. Many was the day, one of those old abandoned machines was a spaceship, taking you to faraway lands. It might also be a fortress from which you threw rocks at the bigger kid intruders. (FROM CALVIN: I personally remember a rock fight me and my friends had with an older bunch of boys back in the mid 60's, over this big red and yellow piece of equipment that had weeds growing out of it. I got hit in the head with a rock about the size of a grapefruit. It put a gash behind my left ear that I wear to this day. My mother told me not to lay on that side of my head that night..my brain might leak out. Then she told me to never go up on Clay Hill again. Of course, I was back the next day, reclaiming "our" property LOL).

On some trips to the hill, you might even stumble across a makeshift doghouse somebody built, for the stray their parents said they couldn't keep---it always had shelter on Clay Hill, where food was brought to it every day.

Did we actually EAT the brown clay on Clay Hill? Some of us did. For some reason, it tasted good, or at least DIFFERENT than anything we'd ever tasted.

Animals, oh boy.. the animals. Not just dogs.. raccoons, possums, squirrels, foxes, rats, mice, birds, hawks, ducks, wild turkeys, even deer that would somehow wander across the shallow parts of the Holston River, all called Clay Hill home.. and of course, SNAKES. The Black Racer was a common site, slithering into the underbrush, just as afraid of us, as we were of it. Often you'd find your favorite spot newly inhabited by a family of something.. moms quick to defend whatever little ones they'd just birthed on YOUR spot.

"DON'T YOU GO UP ON CLAY HILL," our parents told us all the time.. "BOY, YOU AIN'T GOT NO BIZNESS UP THERE." Did we obey?.. Of course not.. Clay Hill held too much adventure. There wasn't a time any of us went up there, that we didn't run into some other boy or girl, walking the paths, just like they owned the place. Many was the night that some of us camped out overnight on Clay Hill.. close to home, but just far enough away they couldn't hear us if we screamed at the noise in the darkness.

Today, most of Clay Hill is much different than we remember. Check the pictures in the PHOTO GALLERY. Once you get over the hill that looks down on the Dunbar Street backyards, it levels off into a huge field, big enough to play football on, with the stands. Gone are the small peaks we shared with sunning snakes.. gone are the mud pits you watched tadpoles dancing around in.. gone are the abandoned pieces of equipment, fortresses of our bygone youth. Very few animals inhabit what's left of "The Hill," having been chased away by earth-movers.

To the casual eye, these days, Clay Hill resembles a reclamation project that rivals any coal-mining ridge in Southwest Virginia. Only two areas remain of our glory days: a still-wild area no bigger than a basketball court directly between the Ruffin and Goodson's Houses, and a small area directly behind the Rutledge and Taylor Houses. You'll still find some well-worn paths, overrun by weeds and brush, with no direction, and devoid of today's human footprint.

Oh what fun we had on Clay Hill!

In many ways, the neighborhood kids nowadays didn't have it THAT good. They'll not know the friendships and adventurous spirits that traversed "The Hill." Even though our parents tried to keep us from going up there, THEY had the same memories of Clay Hill we did. For, the paths we traveled, were already well-worn by mama and daddy years ago.. through Riverview's FIRST Unofficial Playground.


What do YOU remember about Clay Hill, Riverview's First Unofficial Playground? Send it to us at csneed@newschannel9.com and please write it out, so we can all take a walk down Clay Hills's Memory Paths with you. If you're lucky enough to have pictures, please share your experiences, so those memories will never leave us! Louetta Hall's entry below introduces "The Clay Hill Chronicles."
Posted by douglassriverview at 11:27 PM