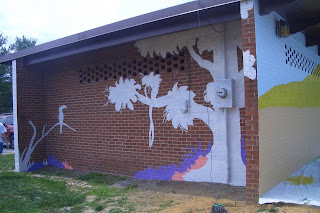 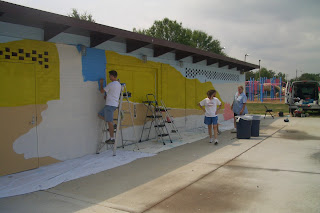 MURAL MAGIC IS A "MARK ABOVE" THE REST

The new mural at the Douglass Splash Pad is painting the town "blue and gold" with the colors of Douglass High School.
With the Douglass Tiger already the centerpiece for the splash pad, the mural that's almost complete, will continue the "safari" theme.
Artist Kathy Blair did a color rendering of the murals to be painted on all four sides of the Splash Pad bathhouse, that used to admit many of us into the old Riverview Swimming Pool. The cost of the mural is about $6,000, and is being paid for by donations, along with city funds. Workers from Murals and More of Kingsport are finishing up the outside painting, and will soon start on the inside of the bathhouse.
Kingsport Parks and Recreation Manager Kitty Frazier says, Riverview neighborhood children will help paint the inside of the bathhouse, continuing the "safari" theme.
"Since the safari idea originally came from the kids, we felt that it was important to let them participate in the painting project," she says, "because that gives them a sense of empowerment in the process."
The Riverview Splashpad Mural is the first project of the Kingsport Public Arts Committee, which was established by the Kingsport Board of Mayor and Aldermen last year, to promote and raise awareness of how the beauty of art affects our lives every day. Ms. Frazier says the Riverview Mural is the first of several projects considered "Art In Public Places," that provides greater access to Kingsport citizens to artwork and sculptures. In the future, at least 10 different sculptures will be placed in the downtown Kingsport area, along with an "Art and Sculpture Walk."
When you get a chance, please check out the Riverview Splashpad Mural. It's a work of art that Riverview and South Central Kingsport residents can be proud of, considering it's the first artwork of its kind in the city.
And it's right in our neighborhood!
Posted by douglassriverview at 1:10 PM